New Knesset member Miki Haimovich, who is a vegan, wants her seat in the chamber to be made of a man-made material instead of leather, JTA reported.

The Blue and White party member wrote Knesset Speaker Yuli Edelstein, saying she would be willing to pay for the man-made chair, which she said should look like all the other chairs. She also suggested that all seats be switched to a man-made material.

The Jerusalem Post reported that prior requests to switch out seating have been rejected. Meretz Party head Tamar Zandberg is also a vegan.

The next Knesset session begins on May 9.

Amazon to Sell in Israel

Amazon has invited a number of Israeli retailers to join its local delivery program, enabling them to sell directly to Israeli customers, Reuters reported.

Firms will be able to use their current Amazon.com seller account to directly fulfill customer orders with local inventory.

“This new service is a positive addition to the current Amazon shopping experience for Israeli customers, providing them with quicker and cheaper delivery, while also offering a great opportunity for local, Israeli businesses to grow their businesses on Amazon,” a source close to Amazon said on May 1.

Large local retailers and shopping malls weren’t as pleased, as stock prices for both fell in the wake of the news.

Unemployment among people over the age of 15 was 4.1 percent in February. The lower number is a sign of economic expansion prior to a May 20 interest rate decision by the Bank of Israel.

For the quarter, unemployment was 4.1 percent, down from 4.2 percent in the last quarter of 2018.

In all, employment totaled 3.97 million in the first quarter. The proportion of full-time workers did decline to 78.5 percent, while the average number of hours worked per employee per week rose 0.8 hours to 36.6 hours.

Firefighters in Givatayim rescued a Holocaust survivor from a burning building on May 2 — Yom Hashoah — The Jerusalem Post reported.

The rescuers used ladders to reach the apartment and rescued Hungarian-born Yehudit Schindler, 87, through a balcony.

“You are angels compared to the devils of back then,” Schindler told the firefighters.

“I have no words. I feel 20 years younger,” she told The Times of Israel. “I suppose I am meant to live. At the age of 12-and-a-half, I left Budapest alone without parents, without a soul, I saved myself.”

The firefighters invited Schindler to a Holocaust memorial ceremony at a fire department station in Ramat Gan later in the day.

Two people suffered minor injuries in the blaze, which was under investigation. 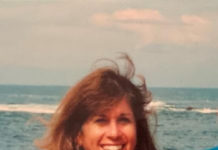