Philadelphia Hebrew Public Charter School was awarded a $600,000 startup grant from the Philadelphia School Partnership (PSP) to help cover general operating costs as the school gears up to open its doors in September.

The new school is run by Hebrew Public, a network of nonprofit public charter schools operating three schools in New York and supporting others across the country. Its new Philadelphia branch will be open for students in the 2019-2020 school year, teaching a curriculum including modern Hebrew with a focus on Israel.

Jonathan Rosenberg, president and CEO of Hebrew Public, said the Hebrew linguistic program will be a great addition to the educational landscape of Philly’s public schools.

For its first year, Philadelphia Hebrew will have 156 students in grades kindergarten through first, selected via lottery (with 533 applying). Each successive year, an additional grade level will be added until reaching eighth grade, with an estimated 702 students at the school by 2026.

Rosenberg described the school as the city’s first “diverse by design public charter school.” With Philadelphia Hebrew not limited to admitting students from any one particular geographic area, Rosenberg said this allows for a more diverse student body.

“We’ve been thrilled to see our applicant pool is coming from every neighborhood in Philadelphia, really a diverse array of neighborhoods in terms of where children will be coming from,” Rosenberg said. “Because this particular charter school is not designed as a zoned neighborhood school, but is a school of choice for families throughout the city, and because it has announced its intentions to welcome children from all backgrounds and to be a diverse school, those things make it the city’s first diversified charter school where racial and economic diversity is part of the school’s mission.”

The school is recruiting staff and renovating its building located at the Falls Center, a multiuse facility in East Falls. Once completed, the school will feature a gym, cafeteria and playground for about six classrooms worth of students. Its first staffers include several general and special education teachers along with two Hebrew teachers. The leadership team consists of Executive Director Emily Hurst, Head of School Elyssa Yuen and Director of Operations Amy Schulz.

The school will mainly be supported at first by the new grant along with a portion of a multimillion-dollar grant awarded to Hebrew Public from the Department of Education. Rosenberg said the startup grant is the third the school has received from the PSP, with the first two in 2016 helping to fund a feasibility study to gauge interest and to locate potential facilities.

“We provide startup capital to incentivize entrepreneurship and the opening of new schools in the city. As in any field, you need some new ideas and new people,” Gleason said. “We’re looking to make sure there’s new energy coming into the educational sector.”

Gleason said the amount award to Philadelphia Hebrew is typical for school startups of its size. He added that it’s uncommon for grants to go toward the creation of new schools, as most of the time these grants support the expansion of already existing educational institutions. Upon reaching certain benchmarks, he said, Philadelphia Hebrew could see additional PSP grants totaling $1.5 million in four years. By then, Gleason said the goal would be for the school to be financially self-sustaining.

“Everything is on track, everything is going well from student recruitment to staff recruitment to facilities planning, and we’re really excited to get it up and running and for our formal launch in September,” Rosenberg said. “Charter schools are always a controversial topic, but we certainly hope to be both a good neighbor in Philadelphia, providing an excellent public school of choice for children throughout the city, and just be a great addition to the existing public school options in Philly.” 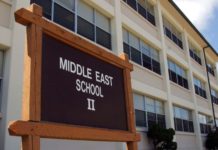