It was around 7:50 a.m. on May 5 when Amy Krulik walked through the doors of the gymnasium.

Wearing a light green poncho, the CEO of the Kaiserman JCC in Wynnewood had just finished directing traffic into the facility’s parking lot. In mere minutes, more than 900 student athletes ages 9 to 12 would join her inside for the opening ceremonies of the 2019 Mid-Atlantic JCC Junior/Mini Maccabi Games.

The one-day Olympic style sporting event has been held annually since 1998. Delegations from 15 JCCs across New York, New Jersey, Delaware, Virginia, Maryland and Pennsylvania came to compete in basketball, soccer, baseball, tennis and swimming. Around 4,000 spectators were expected to be in attendance, and in the middle of it all was Krulik.

The opening ceremony began at 8:10 a.m. with the room packed full of nearly 1,000 people. Cara Mignogna and Noah Kimelheim acted as its MCs. The duo lit the torch (which Krulik made from a solar lawn light and a V8 juice can covered in electrical tape to be “aesthetically pleasing”) and the games began.

This marked the start of one of the hardest jobs of Krulik’s day: loading buses. Hundreds of kids and coaches had to be moved out of the gym to make way for basketball games and placed on buses to six other locations as soon as possible. The challenge was on.

Struggling to get her walkie-talkie to work, the general resorted to her cell phone to command the troops. With trouble afoot, she headed to the front lines outside in the pouring rain to take charge of the operation herself. Confusion hit the sports teams, with a staff member running after one group yelling they were boarding the wrong bus.

As the weather worsened, buses were rerouted to the front entrance. This helped to speed up the loading process, as teams at first walked across a field to the loading zone at a casual pace. Or as Krulik put it, “They’re coming; they’re just slow as molasses.”

With the buses moved, Krulik walked back to the center around 9:45 a.m. to help elsewhere, noting how perfect her shoes were for a day on her feet.

Krulik stopped to help load trays of bagged lunches into a van. The assembly line moved quickly. The van was soon loaded and Krulik moved on to the next task. She entered the gym and learned that all buses had been loaded and were off by 10:10 a.m. Overjoyed, Krulik began high-fiving nearby event staff, hugging a few, too. Later, Krulik said she was feeling proud of herself for their accomplishment.

“To try and move 950 people on buses to six different locations, just trying to move those kids, we practiced and practiced and practiced,” Krulik said. “We really struggled with all of our discussions about the rain and what to do, and we planned and planned and planned some more, and the phrase ‘Man plans and God laughs’ — God should be doubled over with a stitch in his side from all the laughing today — but we try to think about every single contingency.”

At 10:15 a.m., Krulik walked into her office to send out a text message, review some posts on social media and to snag a snack. After taking a breather, the leader headed out to check on things at Friends Central School, where a swim meet and basketball games were taking place. The soccer games had to be canceled due to rain, but all other activities were running smoothly.

One of the students competing that morning was Meredith White, 12, of Baltimore. In the morning, her team had played three games, winning two and losing one. Last year, she said her team was undefeated but lost in the finals “because of a bad call that was made, but that’s OK.”

“This year we’re doing worse, but I feel like we’re going to do better in the long run,” White said. “It’s fun just being able to connect with your team and spend the whole day playing a sport that you love to play.”

Krulik helped to drop off lunches at the school and returned to the JCC around noon. After lunch, she planned on spending a large portion of her afternoon transporting folks like an Uber driver, or “Jewber,” as she said jokingly. The games wrapped up around 5 p.m., with Krulik expecting to go home three hours later. Reflecting on the day, she called this year’s games a success.

“I would give my day an A-plus,” Krulik said. “We’ve done the legacy of the Junior Maccabi games proud today.” 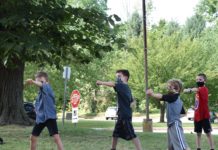 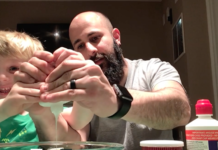 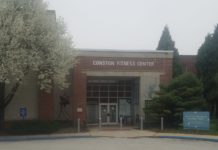