Rabbi Albert Gabbai looked out onto the field of tombstones at Mikveh Israel Cemetery at Ninth and Spruce streets. At his feet was the final resting place of Henriette Marx, her tombstone smashed to bits last year by a fallen tree branch.

This damage is what prompted Congregation Mikveh Israel to take action.

Congregation President Eli Gabay said they are trying to raise $50,000 to make repairs and renovations to 60 graves and the brick wall surrounding the historic burial site. He said restoration work is required, as much of the text on the marble slab headstones has eroded over time, often becoming illegible. Many others have cracked due to age.

The plan is to recarve the stones and restore the weathered lettering with the help of archived photographs and burial maps for reference. Some tombstones have sunk beneath the soil and will be raised to the surface as part of the restoration.

The project also calls for the replacement of an informational sign at the cemetery’s entrance. A few months ago, it was spray-painted with graffiti. While Gabay said they were able to remove the spray paint, the cleaning process, along with weathering, has caused the sign to fade.

“We want to give the cemetery a new face that is so necessary,” Gabay said. “We feel that if we do not do it now, we will lose this cemetery. It will become a cemetery of stones without any markings and will only be known by its name and not by the incredible writings that are written on these tombstones that are so unique to the beginning of that community and so unique to that time and, of course, very important to Jews in America.”

Philadelphia’s oldest Jewish cemetery was established in 1740 by Portuguese and Spanish Jews who immigrated to the New World to escape persecution. The cemetery marked the start of Mikveh Israel as the first Jewish congregation in Pennsylvania. In 1956, the burial site was designated a National Historic Shrines and was added to the National Register of Historical Places in 1971.

The gravesite is the resting place for more than 160 people, one of the most notable being Haym Salomon. A Polish immigrant, Salomon was one of the prime financers of the United States during the Revolutionary War. While his grave was unmarked, a memorial honoring him was placed in front of the cemetery gates, where it’s common for people to leave pennies on the monument as a thank you.

Other burials include those of educator Rebecca Gratz, surgeon Phillip Moses Russell, and Benjamin Nones, who served on the staffs of both Gen. George Washington and Gen. Marquis de Lafayette. Many other Jewish soldiers of the Revolution, along with the War of 1812 and the Civil War, are interred there, too.

Gabbai said it’s been some time since any repair work had been done on the cemetery.

One of the most recent additions were brick-sized stone markers to help visitors identify each grave. He said this was all they could afford about 10 years ago.

Because many people come to the cemetery to learn more about those buried there, Gabbai said the renovations are vital to help their stories live on.

“We have many visitors coming inside the cemetery and see the place. And those visitors, they come and they want to know about the people who are buried here, and they see things without lettering, and it’s difficult for them to understand,” Gabbai said. “So it’s important.”

In the first week of April the congregation launched a GoFundMe fundraising campaign.

So far, the project has raised about $1,300 from about 20 people. Gabay said they also plan on looking into applying for grants to finance the project. Another source of potential funds comes from The Mikveh Israel Cemetery Trust, which gives about $5,000 annually for a summer tour guide.

Gabay hopes they’ll be able to raise the necessary funds to start work this summer and have it completed by spring 2020.

“The preservation of the Jewish landmark, showing the Jewish roots of this country is so vital and import,” Gabay said. “There is so much history here that needs to be preserved, and it’s going to take technical assistance and historical knowledge, and that is going to be lost if we don’t do it in this generation.” 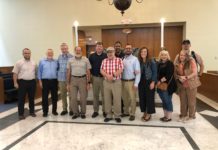 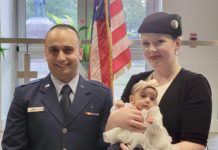 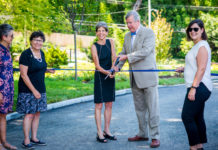