It’s an “eclectic,” “exciting” class, according to Steve Frishberg, the hall’s chairman for 13 years. Frishberg himself will receive the Pillar of Achievement Award for his service.

“I’m very humbled to be recognized,” he said.

This class has the distinction of being the first to be inducted into the new location at the Jewish Community Services Building, which Frishberg said will hopefully open by July 1.

Funny enough, this year’s first inductee, Chuck Brodsky, isn’t an athlete, a commentator or even a coach. He is a baseball bard, a singer, songwriter and storyteller who has been writing songs about baseball for decades, on everyone from Richie Ashburn (“Whitey and Harry,” it’s called) to Eddie Klepp, the first white man to play in the Negro Leagues.

The Haverford School graduate now lives in North Carolina. Brodsky’s favorite sporting memory took place not on the baseball diamond, but on the ice — or rather, on the way there. His father was taking him to see the opener for the 1973-1974 Flyers, the first season with Bernie Parent in goal, and he couldn’t have been more excited. On a pregame stop at KFC, a chicken bone got lodged in his throat.

“I was so afraid of missing the start of the game, I told my dad I wanted to postpone going to the hospital until the game was over,” Brodsky said. “Needless, to say I was overruled.”

Lucky for Brodsky, he was seen immediately, and he made it to the stadium in time to see the first win of a season that would end with the Flyers hoisting the Stanley Cup.

Speaking of the ice: Colby Cohen has found success wherever there’s a rink to play in. The Villanova native won an Inter-County Scholastic Hockey League championship at Radnor High School before going on to be named Most Outstanding Player during the 2009 Frozen Four. Cohen scored the game-winning goal for his Boston University Terriers. In 2010, he signed with the Colorado Avalanche, who quickly traded him to familiar place: the Boston Bruins. That season, Cohen won a Stanley Cup with the Bruins. Today, he is pursuing a career as a television analyst.

Michael Koplove had his share of baseball diamond success. The first team All-City selection by the Philadelphia Daily News was an Academic All-American at the University of Delaware, pitching and playing shortstop. In the majors, the righty with the sidearm delivery pitched in relief for the 2001 Diamondbacks, who won one of the more memorable World Series that year against the New York Yankees. Koplove also won a bronze medal with the 2008 U.S. team, and after a scouting stint for the Angels, does the same job for the Phillies.

Koplove’s favorite sports memory came against the self-proclaimed Greatest of All Time, Ricky Henderson. On a 2-2 count, Koplove struck out his childhood hero with a fastball on the outside corner — or so he thought. The ump called it a ball, and he ended up walking Henderson.

“Either way, it was a great experience for me,” Koplove said.

Perhaps you’re familiar with Howie Roseman, now in his 19th season with the Eagles. All the current executive vice president of football operations has done is bring a Super Bowl to Philadelphia, the very first one. Roseman had previously been the NFL’s youngest general manager in three decades, a role he held from 2010 to 2014. Roseman contributes his time to Alex’s Lemonade Stand, USA Football and the Joint Base McGuire-Dix-Lakehurst, where he was named honorary commander.

Myra Sack is similarly service-minded. Sack, the 2006 Main Line Athlete of the Year and already an inductee into the Lower Merion High School Hall of Fame, was soccer player of the year and team captain during various points throughout her glittering career at Dartmouth.

Chris O’Loughlin’s parents were in show business — his father, Gerald, was on The Rookies, and his mother was vice president of casting for Columbia Pictures Television — but O’Loughlin got his kicks a different way: fencing.

He was a four-time All-American in épée, and captained the team at the University of Pennsylvania. O’Loughlin won a silver medal at the 1989 Maccabiah Games, and competed in the 1992 Summer Olympics (he was first alternate in ’96). Today, he mentors young national team fencers and, last fall, helped Team USA win the gold at the Veteran World Championships. 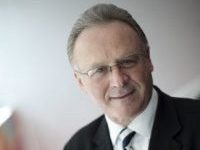 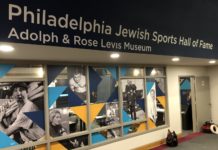