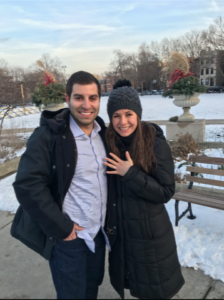 Paula and Joel Kalman of Southampton announce the engagement of their son, Ross A. Kalman, to Allison Ziff, daughter of the late Denise Ziff, and Nancy and Ted Ziff of State College.

Sharing in their happiness are the couple’s siblings Melanie, Joey, Shawn and Andrew Kalman. The couple lives in Chicago and is planning a September wedding there.

Ross is the grandson of the late Esther and Howard Baer, and the late Miriam and Israel Kalman.