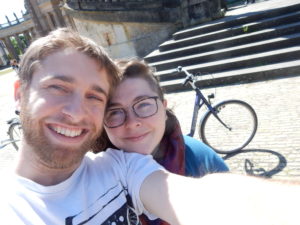 Sharing in their joy are grandparents Bea and Sylvan Eisman, Lillian and Marvin Weilerstein, Eric Rascoe and Ann Bregman Rascoe, the late Jeanne Rascoe and Dov and Yehudit Scheinin, as well as Ben’s brother Jake and Shira’s brother and sister Ariel and Amallia.

The couple lives in the Boston area and will be married there in July.