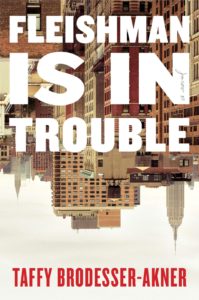 Fleishman Is In Trouble

Fleishman, like Kafka’s Gregor Samsa, is inexplicably in a new world after awakening from strange dreams; namely, the dissolution of his marriage, which seems stranger and more distant from him by the day. Armed with a quick and dirty dating app and his newfound freedom, Fleishman’s New York is transformed (at a blissful early point in his newly single life, a montage of the women he meets through the app is like a mix of Caligula and 8 1/2 and Manhattan all together).

Fleishman, henpecked doctor, self-doubting dieter, loving father and the aggrieved party in his divorce, is a new man. As he settles into this new world, the long and torturous history of his marriage to Rachel is drawn out detail by icky detail, and a picture emerges of Rachel, too — haughty breadwinner, social climber, barely present mother and frigid, nasty wife. When Toby awakes on a different morning to find that his soon-to-be-ex-wife has dropped their kids off at his apartment without warning, and cannot be reached through any form of communication for weeks, this picture only comes more clearly into focus, and Toby’s newfound ability to direct her cruelty back toward her via snarled text and email is a cause for cheering. He will no longer be made the wife in this divorce, as his lawyer tells him he is.

It is, of course not so simple, and Brodesser-Akner, who writes enormously popular profiles for The New York Times Magazine, approaches her characters in the same way she approaches her subjects at her day job: She doesn’t allow them to present themselves on their own terms forever. However revealing it is to see what people choose to reveal about themselves to you, there’s no substitute for a simple change in perspective.

Though much of the story is told from Fleishman’s point of view, there are increasingly frequent interventions from his friend Libby Epstein, a former men’s magazine writer who finds herself suffocatingly contented by her family in a New Jersey suburb (Brodesser-Akner herself once wrote those enormously popular profiles for GQ). It is through Epstein, a close friend of Toby’s since they studied abroad in Israel together, that the more self-serving aspects of Toby’s storytelling are cast in a new light. It is through her — and increasingly, through Toby’s actions — that the true story of Rachel, Toby and their years together is told.

Surprise! Toby’s victimhood is often of his own making, and Rachel’s witch-ness has been more than a little misrepresented. Neither party is completely guilty, though they’re both far closer to that than to innocence. It seems such an obvious lesson: There’s another side to this story! And yet, by withholding Rachel’s full account until nearly the end of the book, Brodesser-Akner implicates the reader in Toby’s cruelty (you want him to get full custody). If Rachel’s telling had never been brought to light, Fleishman Is In Trouble is the story of poor Toby Fleishman who gets to be free of his bitch wife, and the reader is none the wiser — did we even want to hear the other side? Instead, it’s a story about the use and misuse of stories, the way that they mutate into grotesquerie or sunshine-y bliss, whichever is more suited to our conception of ourselves. Fleishman, again like Gregor Samsa, never even realizes that he was always an insect — or, in Fleishman’s case, as cruel and angry as Rachel told him he was.

Brodesser-Akner is a terrifically funny writer — here and there, she drops in empowerment-slogan yoga tank tops that become funnier with each repetition (Namaste In Bed!) — and one can only hope that she never gets the chance to lift a boulder and look at the creepy-crawlies of your life in the pages of the Times.