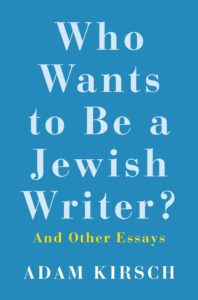 Who Wants to Be a Jewish Writer?

The problem with Jewish writers, Adam Kirsch writes, is that even the best of them detest the label.

Philip Roth famously resisted being categorized as such, as did Saul Bellow, Lionel Trilling and two unnamed novelists whom Kirsch moderates a discussion between at the beginning of his new collection, Who Wants to Be a Jewish Writer? Why accept a label, as Kirsch characterizes their arguments, that seems to “imply that one loves, hates, and so on in a different way from people who are not Jewish”?

Kirsch, who is quite clearly a Jewish writer, does not accept the premise. To be a Jewish writer, he says in the opening essay of his new collection (some original, some previously published), is to write with moral seriousness and particularity, the kind that seems so accessible to the James Joyces and William Faulkners of the world. Those two were “describing a particular way of life with great specificity that they could make it meaningful, even to people who led very different lives,” fundamentally “Irish” and “Southern” writers who nevertheless hold universal appeal.

That is the central tension of Kirsch’s essays, the best of which blast away at the illusions that sustain American Jewish life. Kirsch, a poet, critic and professor whose work appears everywhere from The New Republic to Tablet, sees quite clearly that the problems of the American Jew and the writers among them are of course one and the same.

Jewish writers in a secular world wish to “transcend” their Jewishness, to be considered simply writers (as the great Austrian-Jewish writer Stefan Zweig did, an episode Kirsch writes about with great tenderness); Jewish revolutionaries wish for the same (as Rosa Luxembourg and Isaac Deutscher did, two iconic Jewish Marxists of the 20th century to whom Kirsch applies Deutscher’s proud label of “non-Jewish Jew.”)

Kirsch’s deep familiarity with the texts of Jewish life, though not much directly remarked on, is as much of an argument in itself as what he says on the page. His familiarity with Seamus Heaney is as deep as his knowledge of the Psalms, and rather than setting these texts as oppositional to one another, he seems them as equally rich, complex and worthy of consideration.

To take the Jewish literary tradition as seriously as one takes that belonging to others is to take Judaism as seriously as others take their own lives. There are lots of people and ideas that don’t want Jews to acknowledge, live or practice Judaism, he wrote. “We don’t escape that danger,” he said, “by clamoring to eliminate ourselves.”

Not all of the essays concern Judaism directly. His explications of the work of Heaney, Kay Ryan and Christian Wimman are dense but thought-provoking, and “Night Thoughts,” a Minima Moralia-style collection of aphorisms, is a nice break in the action. But even these chapters are about Judaism in the way that Wesley Yang’s excellent 2018 collection, The Souls of Yellow Folk, is about the Asian American experience, even when he’s not writing about Asian Americans (a book where Yang wonders, among other things, about the connection between the struggles of Asian American writers as they relate to Asian Americans writ large).

Kirsch interrogates some of the very basic assumptions of the American Jewish mainstream with love and with firmness. And you don’t need to be a Jewish writer to try and understand what he’s saying.