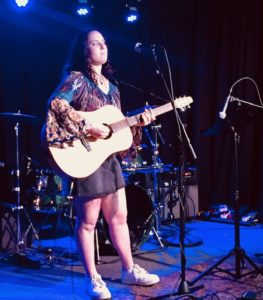 An idea that started as a Bat Mitzvah project evolved into a successful fundraising event Involving 10 talented teen solo performers and teen bands from across the Main Line who came together recently to perform at the third annual Maxie’s Hot Chocolate House in Wayne.

This unique event, held on March 31, was conceived and initiated by 14-year old singer-songwriter Maxie Mandel of Bryn Mawr. Spoiler alert: I am her grandmother, so any attempt at impartiality ends here.

The proceeds benefitted a Philadelphia nonprofit organization called LiveConnections, which provides collaborative music-making and educational opportunities for underserved public school youth and students with disabilities. More than $1,500 was raised from ticket sales, donations and sales of hot chocolate and other snacks throughout the evening.

When planning her Bat Mitzvah project two years ago, Maxie met with Hazzan Harold Messinger at her synagogue, Temple Beth Am Israel, to brainstorm ideas on how to use music to make a difference in the world. From that meeting, the annual concert was born.

“Maxie’s Hot Chocolate House brings out the best in teens making music, sharing their authentic voice, rocking out and having fun all at the same time,” he said, after Maxie performed in a concert recently at the synagogue. 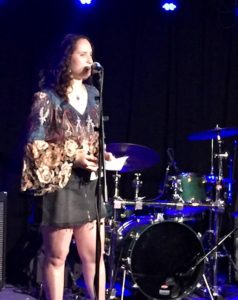 Maxie started piano lessons at age 5, followed by guitar, drum and voice lessons. Most of the songs she performs are comprised of her own words and music, some of which have been professionally produced and appear on her website and on YouTube. She also sings at community events, such as twilight performances, area porch festivals and other area venues.

Maxie feels fortunate to have been the beneficiary of a strong music education both at home and school, but realizes that not everyone has access to such experiences. She appreciates the work that LiveConnections is doing to bring such experiences to kids from all backgrounds.

Her belief in the connective power of music is her primary motivation for continuing her annual event well past her Bat Mitzvah. The first one took place at Temple Beth Am Israel, the second at Radnor Middle School and this year, at 118 North, a live music club that donated its space, lights and sound equipment to the cause. Maxie also secured goods and services from area community partners, including a supermarket, a bakery and a bank.

Hal Real, president and co-founder of LiveConnections is appreciative of Maxie’s support, saying “We are so inspired by Maxie’s dedication to using her music to help fund LiveConnections’ programs aimed at making sure world-class musical experiences are part of everyone’s life.”

The ninth-grade musician intends to make music for the rest of her life, as well as use her talents to help worthy causes, such as LiveConnections. 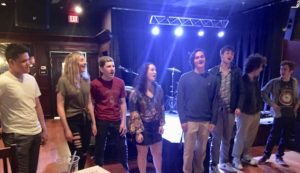 Previously, she composed a song called “As the Sun Rises,” in honor of her friend Brandon, to support Brandon’s Voice, a nonprofit organization that supports autism and other spectrum disorders. The song was published and posted on social media to raise funds.

She has also used her music to support the NICU at Bryn Mawr (where she spent almost the first three months of her life as a premature baby) and the March of Dimes. Maxie fully appreciates the work of both and realizes how lucky she is to possess a powerful voice when so many preemies suffer from lung problems.

Now that her chocolate house is over for this year, Maxie will move on to support other causes.

“I feel like this is what I was born to do, and I plan to continue to use my talents and passion for music to support what I believe in: spreading the power of music, which lets us use our voice and connects us all.”