When Davinica Nemtzow began her job as the LGBTQIA+ coordinator for Tribe 12 in August, she was excited to get started. But she worried that her abstention from drinking would not allow her to engage fully with the community members she served. Much of the culture of queer Center City life, she said, was centered around bars, especially in the vibrant Gayborhood.

What she found instead was an overwhelming desire among Tribe 12 participants to have meaningful, engaging social gatherings devoid of alcohol.

“This has been something that a lot of people in the LGBTQIA+ community have been talking about,” she said.

Across the rest of Tribe 12, the demand for such events seems to be increasing as well. Now, Tribe 12’s program coordinators are looking for new ways to entertain their members, all in their 20s and 30s.

Tribe 12 was founded in 1998 to encourage greater community participation and engagement among young adult Jews; as the needs and interests of that age cohort changes, so too does the programming designed for them. Nemtzow said she’s noticed a desire for social gatherings that aren’t centered around drinking among many people her age, not just in Tribe 12 or the queer community. 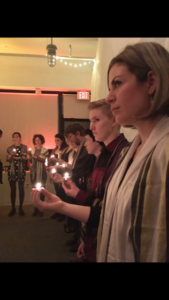 “This is something I’ve seen across the board in my generation, this desire to have these sober spaces,” she said. “And not even like explicitly sober spaces, but just this lack of interest in drinking culture and bar culture. I see more and more from people my age especially just want a great, authentic night with their friends and don’t really care about the bar scene.”

“The majority of them are just people who choose not to drink,” said Ross Berkowitz, the CEO of Tribe 12. “But they want to have the experiences, they want to go out and they want to meet people, but they don’t always feels comfortable at happy hours or spending most of their time in bars.”

Tribe 12, Berkowitz stressed, was already providing such events to its members, though not with the frequency that it is now. Part of the change comes in how events are being marketed to potential attendees. In the past, planners may not have seen an alcohol-free events as a draw on its own. That type of event was typically planned for early afternoons or earlier in the week, Berkowitz said.

Increasingly, sober events are being offered on traditional “going out” evenings, Thursday through Saturday. Even some Saturday evening Havdallah social gatherings, he said, won’t have any alcohol beyond the wine in which the candle is dipped.

Nemtzow, meanwhile, had her doubts assuaged early on, and is working harder still to create sober spaces within Tribe 12. She’s hosted an ice cream social at Franklin Ice Cream Bar, queer game nights at a WeWork, pizza parties and more. Both Nemtzow and Berkowitz see this adaptation as central to their mission at Tribe 12.

“It creates a safer space for people in our community that have struggled with addiction in some capacity to be able to be there and be fully present and still be a part of the community,” said Nemtzow, who has been involved with Tribe12 for about five years. Tribe 12, she said, is an organization where “we really try to create what’s not happening.”

“We listen and we respond,” Berkowitz said, citing a “core value” of Tribe 12. “We want to make sure that people find the Jewish community that is right for them, and we’re gonna make sure to build a community around it.”