Samuel Weissman, a Jewish 17-year-old student at Harriton High School, hopes his research on HIV might one day lead to a cure.

In the meantime, it’s led to him winning second place and $175,000 in the Regeneron Science Talent Search, a science and math competition for high school seniors produced by the Society for Science & the Public.

“Even though it’s now a manageable chronic condition, it still impacts the lives of over a million Americans, 1.2 million Americans,” said Weissman, whose family belongs to Beth Am Israel in Penn Valley. “It’s still associated with a large amount of stigma, and there’s difficulties in accessing treatments.”

Weissman’s research, published in Nature Communications, sought to discover why HIV-infected cells remain in the body even after decades of treatment. He looked at the genetic makeup of this “reservoir” of HIV-infected cells in two patients receiving treatment for HIV. He found that the body does recognize and eliminate infected cells, but through a process called clonal expansion, these cells reproduce faster than the body can eliminate them.

This is because, Weissman said, the virus stimulates cancer genes, which leads to cell division — though not to the same extent as cancer. Hypothetically, stopping this cell division could cure HIV.

Weissman has so far spent three years on this research.

“It could eventually be used on people living with the virus to help eliminate the reservoir,” Weissman said. “Eradicating the reservoir would be key to curing the virus.”

Weissman’s interest in the natural world began when he was in third grade, he said. His mother gave him her old biology textbook, and though he didn’t understand it, it sparked a fascination with biology. Over the years, he read more and became fascinated with the immune system.

One day in seventh grade, he was at his brother’s friend’s house, when he struck up a conversation with the friend’s mother about the immune system.

That mother was Una O’Doherty, a professor of pathology and laboratory medicine at the Hospital of the University of Pennsylvania and principal investigator of the O’Doherty Lab, which studies HIV.

Weissman asked her if he could come and see her lab. O’Doherty said she was reluctant at first, but told him he could spend time there if he didn’t do much more than get the researchers coffee.

That arrangement lasted for a year. Gradually, the researchers started giving Weissman different tasks. They would ask him to research something and report back and, over time, these tasks grew more serious.

Weissman started helping one researcher in particular, a post-baccalaureate named Jake VanBelzen, who was sequencing the genetic makeup of HIV. Weissman taught himself how to program so they no longer had to do the work manually. When ValBelzen had to suddenly leave for a family emergency, Weissman was the one left with the data.

If not for Weissman, it’s possible that this research would have been forgotten, O’Doherty said.

“Sam was instrumental because Sam was the only one who could put together all of Jake’s data and keep the project going,” O’Doherty said. “He had been Jake’s right-hand man.”

Weissman had the opportunity to meet with people living with the virus through Philadelphia FIGHT Community Health Centers, which provide HIV primary care to low-income people.

“Getting to really see the real people living with the virus and the potential impact of my research was a really amazing experience,” Weissman said. “It was really inspiring for me to spend more and more hours at the lab in the hopes that my research could eventually lead to something that could help people.”

Last year, he submitted his research to the Regeneron Science Talent Search.

He was one of about 2,000 students who applied. In January, Weissman learned that he had been selected as one of 40 finalists. The finalists’ research covered a gamut of science and math topics and included studies of exoplanets, the flu vaccine, volcanic eruptions and more.

From March 7 to 13, the group went to Washington, D.C., where they met each other, visited the National Institute of Health, sat down with their representatives and presented their research to the public at the National Geographic Society. The week included the judging process.

Weissman’s work with HIV isn’t over. He will graduate a year early in June, and then he plans to take a gap year and spend the time researching how to put a stop to HIV’s clonal expansion.

“I’m hopeful that in a decade or two, a real cure for HIV could materialize,” Weissman said, “which would be an amazing advance for science in that, for an illness that was an untreatable, unknown death sentence four decades ago, to be able to now cure it would be a huge victory for medicine and for America and for the world.” 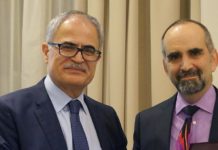