Rabbi Charles Briskin and Cantor Rachel Kohlbrenner, who each began their tenure at Congregation Shir Ami in July, will be installed together at a ceremony on March 29.

The installation ceremony will be followed by a weekend full of volunteer opportunities and a gala on March 30. According to Briskin, a new rabbi and cantor being installed on the same Shabbat is an extremely rare occurrence.

“It’s going to be a very full and busy and exciting weekend,” Briskin said.

Briskin came to Shir Ami after 13 years at a Reform congregation in Silicon Valley; he’d been in California since he attended the Hebrew Union College campus in Los Angeles. Originally from Boston, Briskin said he finds Shir Ami to be most similar to the synagogue he grew up in terms of size and the type of congregation, which is one of the primary reasons he accepted the job.

“When the opportunity to come to Shir Ami made itself available, I jumped at it,” he said. Shir Ami, he continued, “elevates the best of the qualities that I found in each of the previous congregations that I served.”

The Miami native had spent the last eight years as cantor and director of youth and family programming at a small synagogue in Rockville Centre in Long Island. That was a smaller congregation, and Kohlbrenner felt ready for the next step.

“It was time for me to move professionally, to have a congregation where I could really grow and I could grow with the congregation,” she said.

She was especially drawn by Shir Ami’s musical tradition.

“I’m excited to work with our wonderful choir to enrich the musical culture that already exists and to expand on it,” she said.

That desire, according to Briskin, is just one reflection of their main prerogative as the spiritual leaders of Shir Ami.

“We have both a sacred responsibility to preserve the traditions of Shir Ami, while also creating our new traditions and practices as well as we move forward,” he said.

One of those new traditions, by request of the synagogue itself, is a renewed focus on community engagement in a social justice context, according to synagogue president Sharon Benoff.

Briskin, she said, “was a front-runner immediately upon reading his resume.” Ditto for Kohlbrenner. “Her excitement and energy level was incredibly engaging,” said Benoff.

Their shared interest in social justice, especially relating to food insecurity, will provide the backdrop to their installation weekend. Though there will be traditional ceremonies on Friday and Saturday night — the former to be attended by local officials like U.S. Rep. Brian Fitzpatrick, state Sen. Steve Santarsiero and State Rep. Perry Warren among them — March 31 will bring events for families centered around the frequent food drives Shir Ami hosts.

The synagogue wants to go beyond food pantries and drives, Briskin said. He sees a future with “a real serious pursuit of justice and justice work that goes beyond the real important but limited work of food drives and volunteering at soup kitchens and things like that,” one that addresses systemic issues, he said.

The two are committed to teaming together, Briskin said.

“We truly have a partnership,” he said. “We have different personality types which I think really complement each other.” He expressed a desire to unsilo the work of the cantor and the rabbi, a dynamic he’s seen in other synagogues, he said.

Kohlbrenner believes they’re at their best in the times it matters most: providing “meaningful spiritual experiences” and forging one-on-one connections with congregants.

“When we’re at Oneg, and we’re having a chance to greet and bring warmth and build relationships with individual people and congregants in the community, we do a good job of making sure that we connect with all the different people on different levels,” she said of the latter.

All in all, they’re excited for the weekend to come. Their only jobs in organizing the weekend, which has been in the works since September, was to make sure that whoever they wanted to install them was available to do so.

“We can be celebrated and we will let others share their joy for us, with us,” Briskin said. 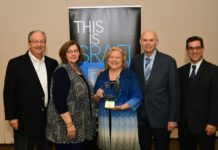 Seeing the Face of God in Others 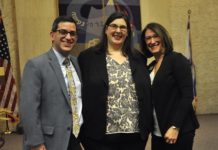