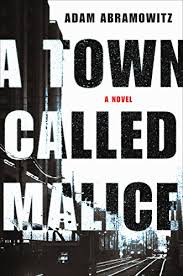 On an increasingly frequent basis, I find myself watching, listening to or web surfing content that really isn’t aimed at me.

As one of the first people in Generation X (born in 1966), I’ve aged out of the coveted Nielsen broadcast demographic of 18-49 and find myself simply tuning out of content clearly aimed at millennials or Generation Z.

The same apparently holds true in reading, as I found myself struggling to complete Adam Abramowitz’s A Town Called Malice.

The book’s reasonably well-written and was interesting enough to keep me engrossed for a while, but ultimately it became a slog. That’s because the book jumps around from topic to topic — kind of like someone who has their face buried in their cellphone as they watch TV and do a couple other things.

In A Town Called Malice, we get mysteries, run-ins with gangs, details about casino chips, assorted dead bodies, a tough-guy rabbi (yes, there are some Jewish elements), some investigations, lots of slang and even more talk.

In fact, there’s too much talk entirely. The book isn’t overly long, but it feels like Abramowitz would have done better to incorporate some elements of the spare style used by a writer such as James Ellroy, author of The Black Dahlia and L.A. Confidential.

A Town Called Malice is about a Boston bike messenger named Zesty Myers — introduced in Abramowitz’s 2017 debut Bosstown — who has an interesting past. His mother was a radical bomb-tossing bank robber who’s been missing for years, while his father, now afflicted with Alzheimer’s, used to run poker games and had a shady role as a “fixer.” Meanwhile, brother Zero runs a moving/storage company.

Zesty’s own past is a bit muddled, too, as he once refused to testify before a federal grand jury in a tax evasion case.

At the beginning of the book, Zesty’s performing at a stand-up comedy club (his other passion in life) when a homicide detective who was involved in the tax evasion case shows up with a Boston Globe reporter.

A Molotov cocktail is thrown at the reporter, who isn’t badly injured, and sets into motion a series of events, including wondering which of her stories prompted the attempted hit. Those stories dig into the gentrification of Boston, gangs infiltrating midnight basketball leagues and Eastern Europeans laundering money through real estate, among other things.

That’s a lot to process, and your head likely will be starting to spin 100 pages in. Everything does get explained by the end — assuming you’re still reading — but Abramowitz might benefit by adhering to Occam’s razor, the principle of logic that says the simplest explanation is usually the correct one.

Unfortunately, in a day and age when even a superhero’s back story is complicated enough to stretch a 90-minute movie into one lasting 2½ hours, we’re likely to see even fewer Occam adherents.