The Hot Shot Heard ’Round the World 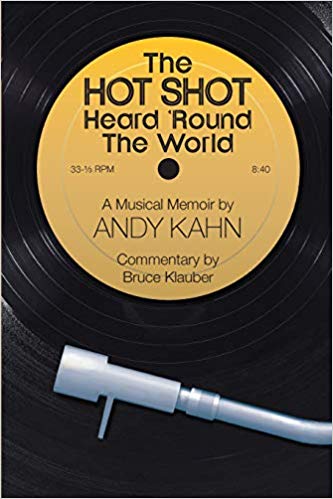 Andy Kahn’s memoir The Hot Shot Heard ’Round the World is a victory lap for the musician, a guided tour of a lifetime of success and spectacular evenings.

The title comes from Kahn’s 1978 hit “Hot Shot,” performed by Karen Young, which sat at the top of the disco charts for two weeks.

Thankfully, the title is a little misleading; there’s far more in this book than an account of two weeks during which a single record sold more than other records in one genre.

Kahn, a South Philadelphia native, co-founded the Queen Village Recording Studios, a Philadelphia institution that hosted everyone from Stevie Wonder to Grace Kelly. An alternate perspective of Kahn’s career is provided by his primary musical partner, Bruce Klauber, interspersed throughout Kahn’s recollections of his unconventional parents and 25-year break from music, among other tales. There’s also Kahn’s other Bruce, Bruce Cahan, his long-time partner and husband since 2015.

Along the way, Kahn can’t help but run into everyone from Charles Mingus to Norman Mailer, partying with Shirley MacLaine and Jacob Javits. He rubs elbows with a laundry list of jazz musicians from Philadelphia and beyond after he starts Queen Village with his brother, and gets written up everywhere from The Philadelphia Inquirer to now-defunct local Jewish papers like The Main Line Jewish Expression and the Philadelphia Jewish Times.

Oddly enough, Kahn is at his strongest when he writes about other people.

Thinking through his interactions with his mother, his uncle, his father and Karen Young, for example, the portraits he draws of them give you a much clearer idea of who Kahn himself is as well. The section about his Uncle Lloyd, who Kahn believes would have been diagnosed with a mental illness today, and his obsession with the jazz records that would be the early soundtrack to Kahn’s life, are an interesting contrast with Kahn’s own singular focus on music. Additionally, both he and Klauber’s fascination with Karen Young all these years later attest to what a fascinating character she was in her own right, and the way Kahn writes about her, displaying his affection, awe and worry, often at the same time, is a highlight of his memoir.

It is these portions of the book, along with the excitement and anything-goes spirit of the first days of the recording studio, that make the book successful and outweigh the lesser moments in the book, like a picture of a letter praising Kahn as a “gifted child” in 1962 and a two-page list of ways in which “Hot Shot” was used “without producing any significant income for its creators.”

For fans of disco and The Sound of Philadelphia, The Shot Heard ’Round the World should be a delight, especially with the added local flavor. And as a self-portrait of a songwriter, performer, businessman and husband, among other roles that Kahn has played, it is both tender and candid.