House Speaker Nancy Pelosi (D-Calif.) deserves to be congratulated for her victory over President Donald Trump. But the victory must be regarded as partial since she was able to get the partial government shutdown terminated, but only for three weeks.

The saga we are living through concerning border security is politics at its worst. Yet it is a prism into what politics is so frequently about: positioning for a future election and optics.

First, politicians do not have job security and they must work hard to keep their jobs and that work is ongoing. Second, politicians, like most people, look for images and pictures and symbols to advance their agendas.

Trump, Pelosi, Senate Minority Leader Chuck Schumer (D-N.Y.) and Senate Majority Leader Mitch McConnell (R-Ky.) were all as focused or more focused on the 2020 election than what was in the best interest of the country today. Trump needs the wall to fulfil a campaign promise, and the Democrats need to block his request in order to deny him the loyalty from his base that he craves.

A 2,000-mile concrete wall is a vivid image that helped Trump win in 2016. It is also an image that is anathema to many Democrats since it paints a picture of the United States which is offensive to their moral sensibilities — the United States losing its exceptionalism status and building walls like dozens of other countries around the world.

This saga illustrates two goals we need to set for American politics.

First, we must figure out ways to make the next election less critical to decisions today than the importance of the policy issues at stake. This can be done in various ways, including longer terms of office and term limits. We need a national commission to address this fundamental problem.

Second, we must shift the attention in our politics from the eye to the ear. Philosophers like Richard Rorty in Philosophy and the Mirror of Nature have decried the role that ocular metaphors play in Western thought for illustrating how knowledge is obtained. Focusing on visualizing the future basically devalues the importance of other human senses, notably listening.

Every politician and corporate leader creates a vision for the future. Truth be told, this leadership style is overrated.

We need a politics — as many of our centrist organizations like No Labels, Better Angels, the Institute for Communitarian Policy Studies, and the Bipartisan Policy Center have been explaining for years — that focuses more on dialogue and listening.

We need politicians who will speak to those tens of millions of Americans in the middle who are not certain and who want bold, creative solutions that take ideas from the left and the right.

Ironically, if we put listening over both talking and ocular metaphors, we will also make an abstract unreachable future less relevant to decisions today because our long-term goals will be more integrated with our current challenges.

In short, we can make the next election less relevant to our politics if we listen more to each other and envision the future less than we try to hear it from each other. Hearing the future does not mean not having long-term goals; it means not having simplistic visions which we will realize and which make us less likely to compromise with others.

Dave Anderson is editor of Leveraging: A Political, Economic and Societal Framework. Where Do Chuck Schumer and Madison Cawthorn Both Quote Torah? At a Chabad Event 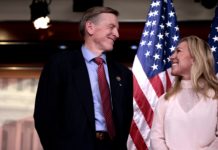