He was 15 or 16 when he first learned that Arthur Bernstein, a cardiologist, had been well-acquainted with Abner “Longie” Zwillman, a notorious gangster whom the New Jersey press took to calling “The Al Capone of New Jersey.” Both men were Jewish, sons of immigrants who took divergent paths to the American dream, intersecting in Bernstein’s office in the late 1950s (he treated Zwillman).

How did that happen? And what does it mean to Bernstein now, as he reaches the same age his grandfather was when he first met Zwillman?

That’s the subject of his newest play, The Ethics of the Fathers AKA The Gangster and the Grandpa, staged by the experimental Theatre Ariel at various locations on Feb. 9, 10, 16 and 17. Bernstein wrote the show, which consists of monologues and stories told by him as he recounts the tales of the two men’s lives, trying to figure out what exactly it meant that they could have so much in common and yet share so little.

Bernstein, who began acting when 9, is from Philadelphia originally, and moved back here a few years ago after spending time in Los Angeles. The North Penn High School graduate studied playwriting at Northwestern University.

The play, he said, evolved over time. For a long time, he didn’t feel he could do the story justice; he felt he wasn’t old enough yet to write a story about the sort of choices that adults are sometimes forced to make. He picked it up and put it down, and a version of it called Edge of a Promised Land was read aloud at PlayPenn. It took a mention of the show to Deborah Mozes at Theatre Ariel to get the final push: She told him it was perfect for the theater and that he had to write it.

In truth, he felt more prepared then to think through the show’s emotional nuances.

“Now,” he said, “I have a sense of perspective on my life and my identity and also what it means to be a grown-up dealing with real life situations like these men were.”

How much did his grandfather know about Zwillman’s exploits? Sure, he was his doctor, but they saw each other socially now and then. Was he privy to Zwillman’s racketeering? Bootlegging? Assault? Bernstein wonders, and wonders if it even matters. The larger questions have to do with what it means for him to live in the world that Zwillman and his grandfather created for him as a Jew in America. Is theater what they sacrificed for? Bernstein is unafraid to shine a spotlight on himself.

“The play really sort of is making an argument for the way that first- and second-generation immigrants in America have to make choices if they want to create a future for themselves here, and it deals specifically with the Ashkenazi Jewish experience in America,” he said.

Arthur Bernstein died in 2004, but Bernstein feels that in a lot of ways, purposefully or not, he’s kept his memory alive. He stands like his grandfather. And there’s his “strong belief that we can talk about any topic with authority.” 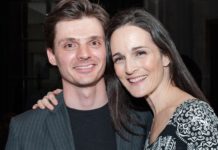