In January 2017, I joined proudly in the first Women’s March, marching with my family to show our support for issues like women’s rights, civil rights and voting rights. I was thrilled by the turnout here in Washington and across the country.

By January 2018, I had serious concerns about comments made by the national co-chairs, Linda Sarsour, Carmen Perez, Tamika Mallory and Bob Bland, now operating as Women’s March Inc. But this march was locally organized, led by the inspiring Mercy Mergenfield. I came carrying a Zioness poster to show my support for women’s rights, civil rights, voting rights and the right of the Jewish people for self-determination.

This year, I stayed home. I can no longer overlook the divisive rhetoric and anti-Semitic record of the national co-chairs, who returned to Washington seeking the national spotlight. They have proved themselves unable to lead a national movement — and unwilling to step aside.

I’m not alone in turning away. While 2017 saw hundreds of thousands of marchers in Washington, and millions across the country, in 2019, the numbers dropped dramatically. Mergenfield resigned, citing her disagreements with the co-chairs. As The Washington Post reported, “Organizers had hoped to see hundreds of thousands of attendees,” but wound up filling just a few city blocks.

What happened is not just a Washington phenomenon. Locally organized committees, the heart of any effective movement, have chosen to go their own way. A survey by JTA found 22 state organizations had disassociated from Women’s March Inc. Just 12 states said they were still connected, including Illinois, where Chicago’s march says it is “not affiliated with Women’s March Inc.” Chicago canceled its march, suggesting smaller events instead. Unsurveyed cities also cancelled.

National and local organizations that were once listed as partners by Women’s March Inc. have dropped from more than 500 partners in 2017 to less than 175. Less than three months after the 2018 midterm elections in which women voters and women candidates changed the face of American politics, Women’s March Inc., an organization claiming to speak for women, is hemorrhaging support.

What went wrong? How did a movement that began with such energy and promise wind up losing so much support in just two years? Why are leaders who worked so hard to build marches in their own communities now separating themselves from the national network?

The co-chairs of Women’s March Inc. say they are appalled. With indignation worthy of Claude Raines’ character in Casablanca, who was shocked — shocked — to learn there was gambling on, they want us to know they are against anti-Semitism. In a last-minute attempt to stem their losses, last month they added the words “Jewish women” and opposing anti-Semitism to their statement of principles. Days before the march, they added three Jewish women to their steering committee, a textbook example of too little, too late.

In their determination to hold on to their titles, the co-chairs expect us to overlook their actual record: their fangirl admiration for the anti-Semitic, homophobic Louis Farrakhan, who combines both bigotries by preaching that Jews turn black men gay; their support for Rasmeah Odeah, a convicted terrorist fighting deportation; and their demand that ADL be removed from antiracism training by Starbucks.

These are not “old stories.” In the last few weeks we have heard Sarsour’s charge of dual loyalty, the age-old libel, citing “folks who masquerade as progressives but always choose their allegiance to Israel,” while Mallory, on national television, refuses to say that Israel has a right to exist.

I realize for many people committed to working for progressive causes, this has been a painful debate. We understand that building coalitions is essential to making policy change, and how important it is at this moment to make those changes. But we can’t build effective coalitions by leaving our values — or our identity — behind.

That’s why I am heartened by what I saw last weekend. Yes, the self-appointed leaders of Women’s March Inc. were still on stage, but the audience that came to hear them was greatly diminished. You might say people voted with their feet — away from anti-Semitism, overt or disguised, away from old bigotries cloaked in the language of new policies.

I doubt there will be another national Women’s March, certainly not without a change in leadership. Our challenge is to understand what just happened. We can use last week’s march as an example of what not to do, and demand better, working in coalitions that represent the best of us and moving forward for women, for our families, for us all.

Ann Lewis was White House communications director for President Bill Clinton and is a member of the board of Zioness. 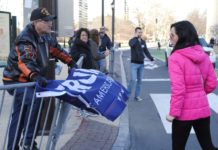