With my daughter’s 16th birthday last week — an otherwise supremely joyous event — I entered into a frightful club: parents of children old enough to drive.

Friends of mine who are already veterans of this elite group, especially those who live in Center City, have told me not to worry. Echoing a nationwide trend, their children put driving off, in some cases, by several years. Not so my daughter, who the day after her 15th birthday proudly declared to her mother and me that in just a year, she’d be driving.

Her overly optimist prediction was a bit off, but at her birthday dinner downtown I happily, if a bit anxiously, informed her that this summer I would indeed be teaching her how to drive. As I ponder how exactly I will impart the wisdom of the road to Esti, I’ve settled on the first of what I shall call the Runyan Commandments of Driving Etiquette: No matter what happens, don’t overreact.

This has a precedent. A “contract” handed to us by our children’s doctor encourages young drivers to pledge to never drive while under the influence and instead call a parent to pick them up, in exchange for the corresponding parent’s pledge to not freak out, to pick them up, no questions asked and defer conversation for the next morning. I figure that if I’m being asked to not overreact, I should be able to insist on the same mentality from my children.

But my reasoning goes deeper than that. When I was learning to fly, one of my first flight instructors advised when in an emergency, the first thing you should do is wind your watch. Few of us have winding watches today, so I can’t exactly say the same thing to my daughter.

The point is that regardless of the preceding event, responding to it should be based on calm reasoning, not jerky reflexes. In a plane, overcontrolling an airframe — what we call “chasing the gauges” — can quickly result in loss of control. So, too, in a car, overbraking or oversteering in a skid can quickly put you in a highway median, or worse.

But as my column isn’t a primer on driving, you’re probably wondering where I’m going with all of this. I fear that as a society, too many of us are overreacting to the indignities of the day. Somebody cuts us off on the Schuylkill, and we flip out. We see a smug Catholic school boy smirking at a Native American in the vicinity of the Lincoln Memorial, and we go ballistic.

To be sure, the initial images and clips that came out of the confrontation between Nick Sandmann and his 11th-grade classmates from Covington Catholic High School in Park Hills, Ky., and Omaha Nation elder Nathan Phillips were jarring. There was Phillips, banging on a drum and chanting what he said later was a prayer for peace, seemingly standing amid a sea of jeering teenage boys bedecked in red Make America Great Again hats. He was face to face with Sandmann, whose class was in Washington, D.C. on Jan. 18 for the annual March for Life protesting abortion rights.

On first glance, it appeared as if the boys were taunting a Native American man, who was in town for a separate, unrelated demonstration. That’s the story national media outlets ran with, and the boys’ school was quick to condemn its students.

When I learned all of this the next night, I felt uncomfortable. Footage of the boys showed their behavior to be reprehensible, and it fit into a pattern of increasingly hateful speech and actions coming from certain corners of this country.

It didn’t take long for a friend of mine on Facebook to relate the incident to the Holocaust, posting a meme juxtaposing the image of Sandmann and Phillips with a black-and-white photograph of a Nazi SS officer face to face with a bearded, Orthodox Jewish man. The glaring and the smirk were almost identical.

But I looked closer at the Holocaust image. Instead of showing a stoic but hateful Nazi, it actually depicted an SS officer cutting off the Jewish man’s beard. The only proper corollary to the events of Jan. 18 — if there is one — would be if Sandmann was assaulting Phillips. No one alleged that happening, so my discomfort grew to suspicion. Clearly, the boys were not behaving as parochial schoolchildren taught to love and embrace their fellow man should behave. But what else was going on?

The next day revealed the backstory, which began almost two hours earlier.

As the boys made their way to the Lincoln Memorial — their chaperones, it should be noted, nowhere in sight — they were being taunted by a few Black Hebrew Israelites, members of a group identified by the Southern Poverty Law Center as racist and anti-Semitic. (These are the same people who I’ve encountered over the years on street corners near the University of Pennsylvania and Temple University, alternately telling me that as a visibly religious Jew, I’m the reason for the Holocaust, and that the Holocaust didn’t happen.)

The Hebrew Israelites, who believe themselves to be the real descendants of the biblical Israelites, told the boys that they were school shooters and other things that can’t be reprinted here. For most of the time, the boys kept their composure, but it appears that toward the end of their journey — when they encountered Phillips — the whole thing had devolved into an open conflict. Phillips says he came in the middle of the melee to offer up his prayer for peace.

The 17-year-olds, who were tomahawk-chopping, should have kept their cool. But I blame their chaperones for allowing a situation to escalate in a city like Washington, D.C., with tensions already high one day before the third Women’s March.

Phillips is blameless. Not so the Hebrew Israelites, who despite their vile hatred of pretty much everybody but themselves — Phillips says they even had a few choice words for him — have managed to effectively stay out of what has become a national debate, complete with presidential tweets and mea culpas from daytime talk show hosts.

Aiding and abetting all of this are the social media denizens who have breathlessly reacted and overreacted, up to and including the president, and their enablers in the national media who have mindlessly broadcasted the reactions and overreactions instead of subjecting the entire affair to logical analysis. For that, as with so many moments of the past several years, we as a country are suffering.

It’s as if we’re all in the driver’s seat, flailing into head-on collisions of our own making. It’s time we all wind our watch. 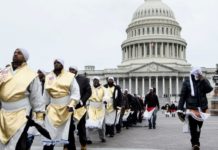