Earlier this fall, turkey, stuffing, family and gratitude filled our homes and hearts. As we sat around the table, we caught up with relatives, perhaps navigated fraught discussions of politics and likely thought about the blessings for which we are thankful.

That time of year — after Thanksgiving and as Chanukah and Christmas are celebrated — makes me reflect on how our community can be a better, more generous, forgiving and welcoming place. Such thoughts were jump-started earlier in December when I traveled to Philadelphia on a service trip with J-Teen Leadership, a teen service organization in Westchester, N.Y., to collaborate with Repair the World Philadelphia, a local organization that works with partners to reduce inequality in the city.

Our first stop was Cradles to Crayons, where we sorted jackets for children in need. There, an employee told us the following story: Two sisters in elementary school were star students. But as winter began, their attendance and grades faltered. When teachers inquired, it turned out the two sisters had to walk to school each morning but had only one winter jacket to share between them. Each night, the sisters would discuss who had more important commitments at school the following day to decide which one of them would get to wear the winter jacket — and therefore be the one who attended school.

This story is heartbreaking: How could a jacket make the difference between truancy and academic success? In just one hour, we were able to pack more than 1,000 donated jackets. That’s 1,000 children for whom a lack of proper outerwear will no longer be an obstacle that prevents them from succeeding in school.

The next day, we took a tour with MuralArts, a nonprofit that employs ex-felons to create art on buildings. The murals were beautiful, but what was most stunning was this: although the rate of ex-felon recidivism in the U.S. is about 80 percent, for ex-felons who joined MuralArts, the rate was only 20 percent.

We also worked with the Jewish Relief Agency, alongside many religious, interfaith and school groups, to pack and deliver more than 2,600 pounds of food. I worked with a Philadelphia high schooler to deliver food boxes and had the opportunity to get to know someone with a different background and bond through our shared service in pursuit of a mutual goal.

On the third day of our trip, we volunteered at a community garden. At first, the place appeared to be an abandoned lot. Only after weeding and cleaning with the garden’s stewards was I able to understand its significance as a memorial to the victims of a gas pipe explosion in the 1980s and a community gathering place.

As my experiences in Philly illustrated, helping those in need doesn’t only help to better the lives of others, but it can also be an educational, social, and all-around rewarding experience. And we don’t have to look far to see similar socioeconomic problems — they exist around the corner in many communities, including my own. Throughout Westchester, obstacles to success including food insecurity, drug addiction, child poverty and unemployment afflict many residents.

The opportunity to serve alongside marginalized communities and those in need is a powerful one. As much as community service work physically improves communities, the relationships built through this work are just as, if not more, meaningful. I had the chance to serve, and by doing so I was able to better understand the perspectives of those different from me, who hailed from various communities, in ways that would never have occurred otherwise.

I had an amazing experience serving in Philadelphia — and now I want to do even more.

Abe Baker-Butler is a high school junior who lives with his family in Rye Brook, N.Y. A version of this article was originally published in the Westmore News. 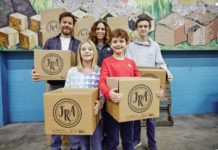