Adam Blum is 23, decently educated and dreams of becoming a television writer. So why is he living on his parents’ couch? And to what lengths will they go to get him off it?

That’s the premise of David Orlansky’s newest play, The Boomerang Kid. Playing Jan. 10-27 at Christ Church Neighborhood House, the play will tackle the millennial experience of living at home after college that will be acutely recognizable to those with a “Jewish Abington upbringing,” as Orlansky puts it.

Orlansky, 31, is a special education teacher at Lower Merion High School, but after class, he’s been writing and producing plays since he graduated from Northwestern University. He and his writing partner, Josh Levin, hatched an idea for a musical that ended up becoming Awesome Alliteration: The 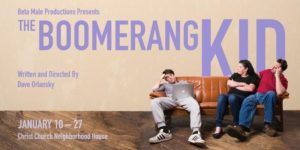 Magical Musical, an education satire that was staged at Philly Fringe. Premise: The school superintendent bans literary devices from the high school curriculum after an overly verbose love letter that he wrote to his girlfriend caused her to choke on the words and die. Heartbroken, he takes out his revenge on the students.

If it sounds ridiculous, that’s the point. Orlovsky considers himself a Mel Brooks acolyte, and is a lover of the absurd as much as he is a comedy fiend.

As a child, he saw his fair share of theater, but it was with comedy that he fell in love. The self-described “zero threat” — can’t act, dance or sing — took to writing jokes and learning how to play the piano, and the closest he ever got to the stage was playing in the pit orchestra for the high school musicals.

Though he studied journalism and history at Northwestern, he found that it wasn’t exactly what he wanted.

“I realized that I just wanted to write what I wanted to write,” he said, rather than be at the mercy of an editor. Combined with his passion for education, he figured he could do both if he played his cards right.

After spending two years as a Philadelphia teaching fellow, the Abington High School grad headed to Lower Merion, where he’s now been for eight years, writing during the summers when he’s inspired, and producing, publicizing, rehearsing and directing during the school year (Orlovsky will indeed direct The Boomerang Kid). The two lives have more in common than it may appear, he said. “Teaching and then putting on a play, and working with actors and trying to get your work on stage, it’s all about being flexible and trying to adapt to different situations.”

“It’s one of the most rewarding feelings in the world, that immediate gratification of seeing people react to work in person. And,” he added, “it can be probably the most stressful situation, ’cause you’re waiting on every joke to see if people laugh, and if they don’t, you go through probably six or seven different emotions.”

Though Orlovsky never lived at home after college himself, Adam Blum’s plight is one pulled together from observations of his friends’ experiences and his own imagination of what it may have been like, with some slight differences.

“My mom says she would’ve killed me if I moved back home,” he said. “Honestly, I can’t even imagine.” l