Zach Schapiro, the 9th-grader who invented the Mahjongg Accomplice app, might be the first genius Vincent Day has ever worked with.

Day, program director for computer science and interactive technologies at Springside Chestnut Hill (SCH) Academy, started meeting with Schapiro to teach him Javascript several years ago. When Schapiro said he wanted to learn about app development, the two set out to learn that together.

Two years ago, Schapiro approached Day with a new project in mind: He wanted to create an app to make mahjong easier and more fun to play.

Mahjong, as many in the Jewish community know, is a game similar to gin rummy. Players are dealt a random selection of tiles and try to complete a hand through drawing and discarding tiles.

The app analyzes the tiles and recommends a few different hands. Players can also choose their risk level, save hands to review later and play their preferred “usual hands.”

Mahjongg Accomplice has been available on the App Store for a few months. Schapiro is in the process of bringing it to Google Play as well. So far, about 60 people from 10 different countries on four continents have downloaded the app, Schapiro said.

Schapiro has found that a player is twice as likely to win with the app than without.

“Sometimes the phone will tell you something you didn’t even consider, and it turns out that was the right thing to do,” said Schapiro, whose family belongs to Congregation Beth Or.

Schapiro has played mahjong with his family since he was 7 or 8 years old. In a kind of family tradition, he learned how to play from his mom, who learned from her mom.

“One of the most fun aspects about mahjong is that it’s a social game,” Schapiro said. “You can play it with family or with friends. You can relax. Each round takes about half an hour. … It’s not a game like chess, which I also like because of the strategy, but in chess you have to be thinking seriously the entire game. Mahjong is a lot more relaxed.”

One day, the Schapiro family had gotten together and started playing a game of mahjong. The game progressed slowly as family members took their time deliberating which hand to play.

Schapiro started to wonder if there was a way to make the hand-selection part of the game go faster.

“It takes a while,” Schapiro said of the hand selection, “and you need to be accurate with your hand selection ’cause otherwise you’re not going to do well in the part of the game that comes next.”

He began developing the app when he was in seventh grade through his school’s Center for Entrepreneurial Leadership Venture Incubator program, an extracurricular option where students can develop a project with a mentor.

After the program ended, Day continued to help Schapiro develop the app.

“He’s not a mahjong player, so I couldn’t ask him something about mahjong, but if I explained to him what I was trying to find, he could help me program it,” Schapiro said. “I talked with him a lot of times over the past two years and meeting with every so often to see how things are going. He played a very large role in the app development.”

Schapiro estimates he spent between 1,000 and 2,000 hours working on the app over the past two years. That’s more than 41 full days. He spent maybe about 500 hours programming, he said. The rest of that time was spent testing the app by playing mahjong.

“Programming is something that I find relaxing,” Schapiro said.

Day provided Schapiro with guidance and resources and helped him work through errors.

Even after years of working with Schapiro to create the app, Day still doesn’t know how to play.

“The idea was Zach’s,” Day said. “He had the perseverance and the resilience and the mental attitude to really pull this through.”

Schapiro has used the app in mahjong games with his family for about a year, he said, before it became available to the general public on the App Store.

He also took the app to a mahjong league during this testing period to introduce it to serious players and see how it fared. It was pretty successful, he said. The players tested out the app and offered him some suggestions. One was to give the option of a comfort level on the app because, they explained to him, some players like to go big or go home, while others prefer to play it safe.

Creating the app was sometimes an uphill battle. Schapiro’s mother Donna said there were times when he could have given up, but Schapiro persisted and has Mahjong Accomplice to show for it.

Now, Schapiro’s keeping busy. He does robotics and chess; participates in science fairs, math tournaments and a debate league; plays sports; and is even building a plane, on top of his regular school work.

When asked if he feels like he’s busy, Schapiro simply said, “It’s all fun to me. You can’t be busy when it’s fun.” 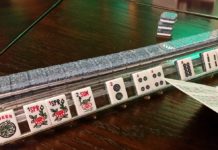 Playing Mahjong With the Granddaughters