CNN ended its relationship with commentator and Temple University professor Marc Lamont Hill after Hill called for “a free Palestine from the river to the sea,” among other comments regarding Israel widely seen as anti-Semitic and endorsing violence toward Israeli civilians. Hill’s firing was first reported by Mediaite.

“Marc Lamont Hill is no longer under contract with CNN,” a spokesperson for the network said.

In the meantime, calls for Hill to be fired from Temple have grown in volume, though he is not without defenders, by principle of either Palestinian solidarity or general defense of free speech and academic freedom.

Hill, a Philadelphia native and a graduate of both Temple and the University of Pennsylvania, was speaking at the U.N. International Day of Solidarity with the Palestinian People on Nov. 28 when he remarked that, “we must advocate and promote non-violence,” but added that “we cannot endorse a narrow politics of respectability that shames Palestinians for resisting, for refusing to do nothing in the face of state violence and ethnic cleansing.”

At one point, Hill paused to pour himself a glass of water, explaining that prior to arriving at the event, he had “literally just got off of a flight from Palestine,” and “was boycotting the Israeli water, so I was unable to quench my thirst.”

Calls for Hill to be fired from CNN and Temple were swift, with Jewish organizations from the Republican Jewish Coalition to the National Council of Young Israel to the Zionist Organization of America joining the effort. Much of the criticism has focused on the phrase, “from the river to the sea.”

Critics noted the phrase originated with the Palestinian Liberation Organization and referred to the establishment of a Palestinian state between the Jordan River and the Mediterranean Sea, with the implicit (and often explicit) threat of violence to Jewish civilians; today, it is a Hamas slogan and is typically used at pro-Palestinian rallies and events.

“The comments are repugnant, they’re sickening,” said Steve Feldman, executive director of the ZOA’s Greater Philadelphia chapter. “From the river to the sea,” he said, “is a call for genocide.

“It’s very bad, and we demand that Temple University fire him,” Feldman continued.

Patrick O’Connor, chair of Temple’s board of trustees, had harsh words for Hill in an interview with The Philadelphia Inquirer.

“It should be made clear that no one at Temple is happy with his comments,” O’Connor said. “Free speech is one thing. Hate speech is entirely different.” The comments “blackened our name unnecessarily.”

The Temple News, the university’s student-run newspaper, reported Dec. 4 that O’Connor had “requested Temple’s legal department determine if it can reprimand Hill.”

The Temple Association of University Professionals reacted strongly to O’Connor’s comments, releasing a statement the day after the remarks were published online. It supported a message by Temple President Richard Englert that, while acknowledging the pain caused by Hill’s comments and disassociating the university from them, defended Hill’s “right to express his opinion.”

“Professor Hill’s remarks are clearly protected by the principles of free speech — as President Englert noted in his message to the Temple community — and by academic freedom, which we are disappointed to find has thus far not been mentioned by Temple’s administration.”

The Philadelphia chapter of IfNotNow, a Jewish organization opposed to Israel’s presence in the West Bank that has protested Jewish communal institutions, released a statement in support of Hill, calling criticism of the professor “vicious attacks.”

“Opposing the Occupation is not an attack on the Jewish community and it is not anti-Semitism. Like many other nations, including the United States, Israel has committed and continues to commit terrible injustices,” they wrote. “People who use their platform to shed light on that truth and uplift calls for freedom and equality are working to make this world safer and more just for us all.”

CAIR-Philadelphia also weighed in, releasing a sharply critical statement calling for Hill to be rehired by CNN.

“We find it ironic that organizations that have repeatedly complained about the so-called ‘de-legitimatization’ of Israel are now attempting to de-legitimize and silence public critics of Israeli human rights abuses,” it read.

Hill, who has not responded for requests for comment, took to Twitter to clarify his remarks, emphasizing that he did not intend to call for violence in that manner, nor were his statements intended to be anti-Semitic or supportive of Hamas.

“My reference to ‘river to the sea’ was not a call to destroy anything or anyone,” he wrote. “It was a call for justice, both in Israel and in the West Bank/Gaza.

“I believe in a single secular democratic state for everyone. This is the only way that historic Palestine will be free,” he said.

Since then, he’s penned two open letters, one in the Inquirer, and one in The Temple News.

“My vision of justice for Palestinians absolutely does not come at the expense of justice for Jews anywhere in the world,” he wrote in the latter. “To anyone who felt that my comments suggested otherwise, I apologize.”

This story was updated on December 6.

Israel Has More Daily Per Capita Coronavirus Deaths Than US 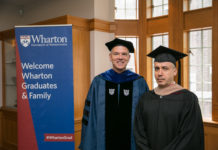