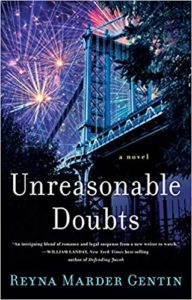 Liana Cohen is in a bit of a rut.

She’s working as an appellate lawyer in New York City’s Public Defender’s Office, but has lost passion for her job — looking for legal errors (not proving innocence) that might help unsavory characters win a new trial has made her jaded. Her boss has called her out for her attitude.

Meantime, the Ivy League-educated protagonist, who lives on the Upper West Side, has a rising attorney boyfriend named Jakob, but she can’t stand his soulless corporate legal peers (she had been a summer associate at his firm).

At a dinner with Jakob, Jakob’s boss and his new bimbo girlfriend, Liana snaps when questioned about the merits of assisting convicts who likely are guilty; she responds by asking the boss about what morally reprehensible corporate client he is working for to the detriment of millions of average Joes.

Things slowly change however, when a new appeals case is dropped in her lap.

A felon named Danny Shea contends he is innocent of a rape charge — and Liana wants to believe him. But she’s conflicted because she wonders whether her newfound interest for the job is because Shea is actually innocent or because he’s a handsome guy who speaks and writes well.

The case itself seems a fairly straight-forward instance of “he said, she said,” but Liana is drawn into Shea’s web, agreeing to meet him even though there’s no reason to do so. Soon, Liana is drawing comparisons between the inmate and Jakob.

There’s a heavily Jewish thematic element to Unreasonable Doubt. Liana — who’s Jewish, but not particularly well-versed in the religion — attends Shabbat services as well as a Jewish wedding early in the book. She also consults with Rabbi Jordan Nacht, who becomes an important character. Themes of tikkun olam and Jewish justice ideals are discussed, and the rabbi helps Cohen ascertain her bashert.

Although it’s sometimes hard to work up any real sympathy for Liana, the crisply written Unreasonable Doubt moves quickly and keeps readers on the edge of the seat with dialogue that rings true.

Author Reyna Marder Gentin knows her stuff and displays that in her debut novel; the Yale Law School graduate spent 18 years doing essentially the same job Liana Cohen does in the book and also worked as a juvenile rights attorney with the Legal Aid Society.