These are well-known phrases in any Eagles fan’s lexicon, but they are also the names of some of the drink specials that were on tap for Josh Markowitz’s Sept. 29 Bar Mitzvah. (If you wanted water, you had to ask for Patriots’ Tears.)

The celebration for his big day, which followed a service at Main Line Reform Temple, was Eagles-themed — a fitting decision for a big-time fan who goes to every home game with his dad, David, and older brothers, Justin, 18, and Jared, 16.

The whole family also headed to Minnesota for the Super Bowl.

“We are huge Eagles fans,” said his mom, Lecia Markowitz. “What better theme than this for Josh’s Bar Mitzvah?”

It was the week leading up to the big day, and Markowitz had finished the final fitting for her dress, a black number she was still searching for appropriate green jewelry to accessorize with.

She was excited for the celebration, which was the culmination of planning and plotting special surprises for her youngest son.

One such surprise included David Markowitz making a costume change during the reception and donning a Mummers outfit like Jason Kelce during the Super Bowl parade.

Josh did not know about this beforehand, Lecia Markowitz noted.

And the Eagles certainly influenced the rest of the party — even starting with the invitations, which were Eagles green and black with an outline of the now-famous “Philly Special” play.

The family built an 18-foot tailgate truck to serve as the bar inside where bartenders served the aforementioned Eagles-themed concoctions. The Eagles pep band made an appearance to lead the 265-guest crowd in the Eagles chant as a surprise and the green, vinyl dance floor was made to resemble a football field.

The theme was decided before the Eagles made it to Minneapolis, so the outcome of the game, whatever it was, would not have been a deterrent.

The Birds flying out victorious, however, certainly did not hurt.

“We decided before they won the Super Bowl, probably since last fall, we were doing an Eagles theme,” Markowitz recalled, “and then when they won we were like, this couldn’t have turned out any better.”

But while there was plenty of Eagles spirit in the room, with photos of Josh superimposed on various Sports Illustrated covers alongside blown-up versions of those featuring Eagles players, plus photos interspersed of him and his family from various games and, of course, the Super Bowl, Markowitz noted the party — as fun as it was — was not the most important part of the day.

It was an especially emotional day, as it was the Bar Mitzvah for their youngest son, she said.

“Having all our friends and family together — how many times in your life is everyone you love in the same room together?” she said.

The Markowitzes were not the only ones to bleed green during a special occasion.

In fact, fans taking their enthusiasm for the team all the way to their Bar Mitzvah or even a wedding is part of a larger trend.

“Absolutely,” confirmed Stephanie Fitzpatrick, director of talent and emcee at EBE Entertainment. “It’s been a huge trend as of late.”

She recalled Jennifer Metts and Craig Adams’ recent wedding, which, while not Eagles-themed, featured themed drinks and an

Eagles ice sculpture, and the crowd joining together for the Eagles chant.

The chant and the team’s fight song along with other notable songs like Meek Mill’s “Dreams and Nightmares,” which the Eagles came out to during the Super Bowl, have definitely been played more at events, she said. Their bands have all learned the songs and the DJs have them at the ready.

“It really wakes the entire room up and gets everybody in the spirit, which is really nice,” she said. “If people weren’t ready to party before, they’ll definitely be ready after this. It’s a huge crowd participation moment.”

The timing of the Super Bowl and Dillon Frankel’s Bar Mitzvah was pretty significant, noted his mother, Stacy.

And Dillon was in Minnesota to see it all happen.

“It was a busy week,” Stacy Frankel said with a laugh.

But it was all worth it, as Dillon became a Bar Mitzvah the morning of Feb. 10 at Congregation Beth Or and celebrated later on the club level of Lincoln Financial Field itself.

An appearance by Swoop and tours of the locker rooms and press conference area for the kids added to the experience.

A special video surprise for the Bar Mitzvah boy featured a cartoon version of Merrill Reese talking about Dillon’s big day with a fellow animated Carson Wentz and other players.

With the help of an event planner whose son also had his party at the Linc, Frankel tried to incorporate as many creative details as she could within the space. Even the invitations had brown trim that resembled that of a football.

The food was themed around the idea of a tailgate, including a French fry station.

Like at football games, hawkers went around as guests left, hoisting trays of cotton candy, popcorn and Cracker Jacks.

Drinks, too, were on theme with a “Dilly Dilly” special, a nod to the Bud Light commercials that aired leading up to game day as well as to Dillon himself.

“It just couldn’t have been better,” she said.

The Bar Mitzvah boy sported a jersey during the party, which read “Frankel, #13” on the back. (Josh Markowitz did something similar, his mom noted, and all the men there wore green ties.)

“The best part about it, really, was the people,” Frankel said, noting relatives even came in from Israel. “When you have everybody in your life in one place —  everybody was there — it was amazing. It was just a big milestone. 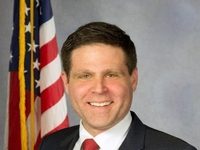 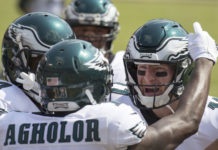