Amanda Burnham’s works have a history of serving as milestone pieces for various galleries.

When the newly renovated Baldeck/Hollis Gallery opened at the Berman Museum at Ursinus College in the fall of 2016, her “In the Weeds” was its inaugural exhibition.

Now through November, with an artist’s reception on Sept. 27, her “In Situ” exhibition will be the final installation in the gallery at the Gershman Y.

She was approached about an exhibition in the Gershman Y Gallery before it was announced that the community center was refocusing its mission and transitioning to become the Gershman Philadelphia Jewish Film Festival.

But after that announcement, she found a deeper purpose for the exhibition.

“When it turned out this would be the last exhibition, I thought this piece that I’m making really needs to address the building itself,” said Burnham, who is on the visual arts faculty at Towson University.

Her work often takes the form of what she calls a “large, site-specific drawing,” in which she uses paint and ink the same way one would with a regular drawing but swaps paper for the walls — and sometimes the floors — of the space in which she is creating.

With the Gershman, she chose to use the entire building as inspiration.

“The choices I made in it were about looking at the building and thinking about the building beginning in its identity as the Y, the Gershman Y, and its role in the community,” she explained. “How it was sort of a locust of activity and all different kinds of community making — I wanted to embody those ideas in what I made.”

She had worked with exhibition curator J. Susan Isaacs previously, and it was the large drawings that interested Isaacs, Burnham said.

“This was the work Susan was really interested in me staging for the Gershman because it is such an interesting and historically important space,” she said. “Architecturally, [it’s] just interesting in its own right. Visually, formally, there are a lot of unique features.”

In creating these large-scale pieces, as she has in other places like Baltimore, where she has lived and worked for the last 11 years, she tries to immerse herself in the area and the neighborhood of the space, and uses conversations she has with those in the area and who have connections to the space as inspiration.

A Toledo, Ohio, native, Burnham was not initially familiar with the Gershman Y and its history.

She spent time talking with those who’ve worked there and acquainting herself with its surroundings to better inform her process.

She used archival information and historical documents to learn more about the story of the building and the organization it housed, which dates to 1875 when it started as the Young Men’s Hebrew Association. Its current building at Broad and Pine streets has been the organization’s home since 1924.

This created an intimacy with the space that she admitted made her sad when she found out it was transitioning and her installation would be the gallery’s last.

“Learning so much about it and the import of it and hearing this was the end of an era, that was sad,” she said with a laugh, “because I understood more what it has meant. … I’m not sentimental about taking my work apart after, because when I make these pieces they’re not meant to ever be anywhere else. It’s made for the space, and that’s it.

However, she anticipates seeing the future of the organization as it transitions.

“I know that the organization in its new incarnation has got big plans, too,” she said, “and I look forward to seeing where they go.”

Having the background and knowledge of the Gershman’s history only further inspired her to incorporate it into the piece.

She was particularly struck by the wide array of programming the space has held throughout its history, pointing to past gallery exhibitions from such heavy hitters as Andy Warhol.

“Looking at the history of gallery exhibitions at the time spoke of the types of work that were shown and performances that occurred, and it went on and on,” she said. “It just struck me that this was a space that was really adventurous and ambitious in what it was trying to do.”

Its history factors into the name of the exhibition, which translates to in the natural or original position or place — but Burnham saw a double meaning in that.

“‘In situ’ in a very direct way refers to how the work is arrived at, literally in situ, it’s made on site,” she said. “However, I meant for that to have a double connotation, a double meaning in the sense of calling to mind all that has occurred in this building.”

And though she isn’t Jewish herself, incorporating the building and organization’s history as a Jewish community center and hub for specific cultural and educational programming made an impact as she was creating the work.

She hopes that history resonates with those who view the exhibition as well, which will include smaller collage creations she’s made in the past.

“My thought about it, specifically with the site-specific work, was to get people reflecting on the importance of this space, and the energy and activity that it inspired and contained,” she said, “and I hope that they come out of this exhibition thinking about that and the importance of spaces like this in general, the need for them.

“I wanted that piece to embody the import, and especially the activity, engendered by the space over the years,” she said, “and hopefully that comes across.” 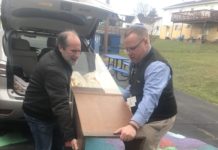 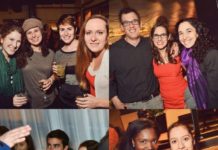 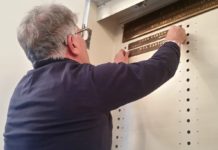