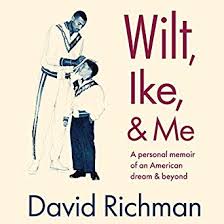 Most teenagers would be rather miffed if their parents told them to vacate their bedroom and take up residence down the hall in the guest bedroom.

That’s because he was being displaced by legendary basketball star Wilt Chamberlain.

Richman’s father, Ike, was a prominent attorney and co-owner of the then-fledgling 76ers — he had bought the Syracuse Nationals a couple years earlier for $700,000 with partner Irv Kosloff and moved them to Philadelphia, replacing the Warriors, who had departed for California.

In 1965, the Sixers were struggling both in the standings and at the box office, drawing a mere 2,000 fans per game in 10,000-seat Convention Hall.

Ike Richman had a solution for both problems: He traded for the Overbrook High School legend, who had played two seasons at the University of Kansas and performed for a while with the Harlem Globetrotters before joining the Warriors in the NBA. He also was Chamberlain’s personal attorney and financial adviser, so his hospitality included room and board in their Cheltenham home.

As you might imagine, 10th-grader David Richman was pretty excited, not only for the Sixers but to hang out with Chamberlain.

“He was a great guy — funny and smart,” David Richman said in an interview.

Chamberlain and the 16-year-old formed a fast friendship, playing cards or miniature golf, taking rides in exotic cars or simply sitting around the dinner table. In Wilt, Ike & Me, you’ll hear tales from both on and off the court about the larger-than-life Big Dipper. That includes David Richman receiving dating advice from the notorious ladies man, who claimed to have slept with 20,000 women.

Chamberlain moved out after the 1964-65 season, which ended in disappointment (the Sixers would win the championship two years later), but he and David Richman remained friends for years afterward. Richman even visited Chamberlain in his famous Los Angeles mansion.

Beyond the stories of Chamberlain and the 76ers, there’s more to the book, including family history, Jewish recollections and even some new-age spiritualism. In some regards, it’s a Jewish version of The Wonder Years sitcom, which spotlighted the coming of age of a teenager.

Like the fictional Kevin Arnold, David Richman deals with siblings, interest in the opposite sex, high school and the burgeoning counterculture. Although The Wonder Years never specifically mentions where the action was occurring, it seems likely it was Los Angeles where, ironically, Chamberlain was traded late in the decade.

Although the death of Kevin Arnold’s father is only mentioned in the show’s finale, Ike Richman’s death — he died courtside at the Boston Garden in December 1965; a grief-stricken Chamberlain scored 28 points and grabbed 30 rebounds that night in a Sixers win — obviously plays a significant role in David Richman’s life, as would other deaths, including his grandfather’s.

But it’s the life of Ike Richman that has the biggest impact on David Richman’s life, as he’ll explain in detail.

Wilt, Ike & Me won’t win any literary awards, but anyone with an interest in Chamberlain, the Sixers, the 1960s or Jewish Philadelphia in the ’60s will likely find it an enjoyable read.