Around 11:30 a.m. on Aug. 9., a blue sedan turned right at the intersection of Roosevelt Boulevard and Grant Avenue in Northeast Philadelphia. The man sitting in the passenger seat rolled down his window, glared at the protesters and flashed a pair of middle fingers.

About five members of the Bloodstained Men, and about 10 locals who joined them, chuckled and cheered. They’re used to it. They were in town to protest circumcision of infant boys, having reached the final stop of their 21-day tour spanning the Northeast.

The group’s provocative message was displayed on signs — “Circumcision is medical fraud” — and on their outfits. They were dressed in white from head to toe, aside from cowboy hats atop their heads and splotches of red paint covering their groins, mimicking the bloodspill associated with circumcision.

The brit milah is a sacred ceremony in the Jewish faith, during which the foreskin is traditionally removed from the penis of a male infant on the eighth day of life. Detailed in the Torah’s account of Abraham circumcising his son Isaac, circumcision is also common in Islam. 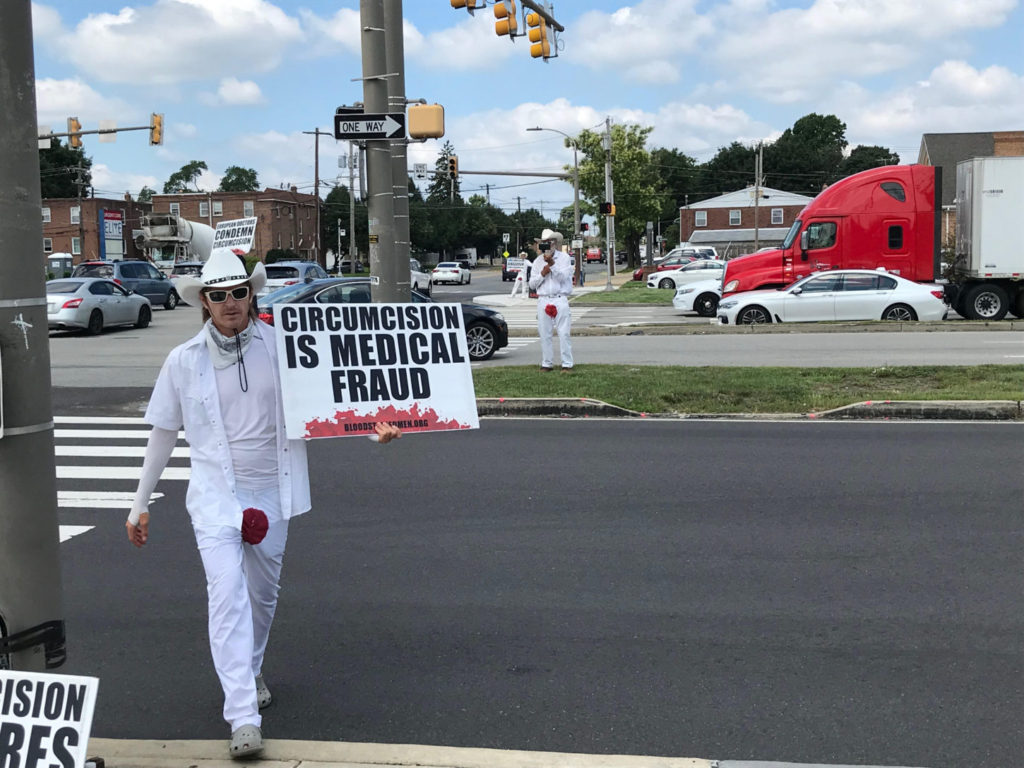 Alisa Mcneil, 32, joined the group on Aug. 9. Raised by a Jewish mother and a Lutheran father, she opted not to have her two sons circumcised.

“My Jewish side of the family thinks I’m bizarre for not circumcising my children. I wanted to give them the choice, more than anything,” said Mcneil, who is no longer a practicing Jew.

That’s what the Bloodstained Men’s argument boils down to: choice. The group places circumcision of boys on a similar moral plane to female genital mutilation, a practice applied in some Asian, African and Middle Eastern countries rooted in tipping gender superiority to males by robbing women of their sexual freedom.

Harry Guiremand, 63, is one of the senior members of the Bloodstained Men. He said he realized his body had been “violated” when he was 16, and has been passionate about informing people about circumcision ever since.

“It’s a hard thing to talk about, because it’s always hard to talk about religion,”  Guiremand said. “The problem is it’s being done to boys in hospitals, with false claims of benefits.”

The American Academy of Pediatrics says circumcision’s benefits outweigh the risks, but refrains from recommending circumcision for all male newborns. The choice is up to the parents.

The Bloodstained Men argue against that. The group  cites a report published in Pediatrics in March 2013 signed by 38 physicians from 16 European nations that said “nontherapeutic circumcsion of underage boys in Western societies has no compelling health benefits.”

Rabbi Betzalel Katkovsky, a member of the London School of Circumcision, is a Philadelphia mohel and a member of Congregation Beth Solomon. He said he’s been performing circumcisions for about seven years, and his belief in the ritual is forged by his deference to Torah.

But his appreciation for the practice runs deeper.

“It prevents people from getting certain diseases,” Katkovsky said.

“Everybody has his own political agenda,” the rabbi continued. “Being a religious Jew and living according to Torah … for me it’s not a question. It’s part of our life. It’s a covenant between [a man] and God.”

The founder of the Blood-stained Men, Brother K — he said he legally changed his name in 1986; the “K” stands for “kind” — stood on the sidewalk during the protest. He stepped back for a moment, peering down at his groin.

“The bloodstain is the most powerful protest symbol in human history,” he said.