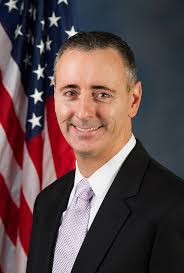 An appearance by U.S. Rep. Brian Fitzpatrick, the Republican who represents Pennsylvania’s 1st District, at an April 15 event in Doylestown is coming under scrutiny for falling in close proximity to an event at the same location that featured speakers who promoted anti-Jewish conspiracy theories.

The event that Fitzpatrick attended commemorated the eighth anniversary of the plane crash in Smolensk, Russia, that killed 96 people, including then-Polish president Lech Kaczynski and other prominent national figures.

Fitzpatrick popped in to the National Shrine of our Lady of Czeslochowa and, after 15 minutes, left. The Shrine is celebrated as a beacon of Polish pride in the area, and Fitzpatrick was making his second consecutive trip to the annual event, which is organized by the Smolensk Disaster Commemoration Committee (SDCC). His predecessors have done the same since 2011, said Pat Long, Fitzpatrick’s congressional office spokesperson.

While there, one of his staffers presented an event official with a certificate honoring Antoni Macierewicz, Poland’s former minister of national defense, noting that a flag had been flown over the U.S. Capitol for his “continued fostering of Polish-American relations.”
Macierewicz admitted in 2002 to having read the Protocols of the Elders of Zion, a fraudulent text weaponized by Hitler that claimed Jewish people wanted to take over the world.

“I read it. It is very interesting. Some say it is authentic, some say it’s not. I am not a specialist. Experience shows that there are such groups in Jewish circles,” Macierewicz said in 2002.

“We really had no understanding of his anti-Semitic past. That flag was not presented in that regard,” Long said. “After reviewing his past, we completely disavow those anti-Semitic remarks.”

The day before Fitzpatrick’s appearance, a “socio-historical conference” sponsored by the SDCC at the Shrine featured three Polish speakers known for making questionable, controversial statements about Jewish people, including Macierewicz and Ewa Kurek, who has previously said Jews had fun during the Holocaust. That event was not mentioned on the invitation sent to Fitzpatrick’s office, but it was listed as part of the same commemoration by the website rocznica-smolensk.us.

The SDCC is a separate entity from the Shrine, a prominent Catholic Church in Bucks County.

“If somebody had a two or three-day conference, and had Louis Farrakhan or David Duke as speaker on day one, and somebody else showed up on day two, to the exact same conference, would you think that there may be a question of poor choice involved? Of possibility legitimizing those types of speakers?” said Mark Weitzman, the director of government affairs and the director of the Task Force Against Hate and Terrorism for the Simon Wiesenthal Center.

The SDCC’s invitation to Fitzpatrick encouraged the attendance of “Polish-Americans and others who value truth and justice for the victims of the Smolensk Disaster,” on April 15.
“We had no prior knowledge of [the April 14] conference or its attendees, and after learning about Ewa Kurek and some of those others speakers, the congressmen completely disavows their work. He finds it abhorrent and repulsive. The congressman is a staunch supporter of Israel, which his voting record reflects,” Long said.

“The commemoration ceremony that I attended was always focused on the Smolensk disaster, and was designed to provide some comfort to the families of victims, some of whom regularly attend the commemoration,” the elder Fitzpatrick said “I’ve always been proud to support our Jewish community and the state of Israel. That’s why I was shocked to learn that some of these speakers; [after] looking into their past, I find their work repulsive.”

Kurek is a Polish author who has said that Jewish people had fun in ghettos in Poland occupied by Germany during World War II. Kurek was slated to receive an award at the Polish Consulate in New York in April before Polish officials put a halt to it amid mass complaints about the author.

Fitzpatrick, 44, mingled with guests at the April 15 commemoration and presented a certificate that was submitted to the Congressional Record in memory of the Smolensk plane crash.

Jan Zaryn, a Polish senator, was also listed as a speaker at the April 14 event. A member of Poland’s ruling Law and Justice (PiS) party, Zaryn is a vocal supporter of the recent legislation passed in Poland that outlaws blaming the nation for crimes committed during the Holocaust. The bill calls for up to three years of prison time or a fine for accusing the Polish state or its people of complicity with the Nazis during the German occupation. Israeli Prime Minister Benjamin Netanyahu called it an “attempt to rewrite history.”
Zaryn has stood by the bill, and said shortly after its passing that Holocaust survivors were not exempt from its guidelines.

“If a Holocaust survivor falsifies Polish history, lies and says there were Polish concentration camps during World War II, then his status as a survivor is irrelevant in the context of the lie,” Zaryn said.

“I don’t know the [SDCC’s] specific agenda. I’m just going on the record that they invited not one, not two, but three speakers — maybe more — who have taken a highly questionable approach to issues relating to Jews, the Holocaust, Poland, etc,” said Weitzman, a member of the U.S. delegation to the International Holocaust Remembrance Authority.

“Ewa Kurek is a historian. She was a cooperator and friend of Jan Karski, who is well known for providing the United States government the facts about [the] German Holocaust on Polish, Jewish, Romes and people of other nationalities in the concentration camps during World War II,” he wrote. “I am not aware of any statements made by either Antoni Macierewicz or Jan Zaryn that could be considered anti-Semitic.”

Fitzpatrick is up for reelection in November against Democrat Scott Wallace.
Democratic Jewish Outreach Pennsylvania announced last week it would not endorse Wallace, 66, in the wake of news that Wallace was the co-chair of a family-operated fund that endorsed organizations supportive of the boycott, divestment and sanctions (BDS) movement against Israel.

“[Fitzpatrick] has a very strong relationship with the Bucks County Jewish community. He has met with many of the rabbis, and he continues to solicit input on issues of concern,” Schatz said.