A year shy of a half-century ago, 800 people crowded into a church basement in Washington, D.C., for something revolutionary: It was called the Freedom Seder.

Powered by the assassination of the Rev. Martin Luther King Jr. a year earlier, it brought blacks and whites, Jews and Christians together in a radical retelling of the Passover story that intertwined the African-American and Jewish experiences in their movement from slavery and oppression to freedom.

At the center of it all was a young radical named Arthur Waskow. King’s assassination and the riots in Washington that followed had awakened his Jewish identity, and he had written a new haggadah for the Freedom Seder.

On April 3, Waskow, now 84, stood before an interfaith crowd of 300 in the basement of another Washington church. Long a rabbi on the edge of the Jewish mainstream, he told those gathered for the Freedom Seder’s 49th anniversary that every age has its pharaoh.

When the riots broke out in Washington after the King assassination and the city was occupied by the National Guard, Waskow had a revelation as he headed home for Passover: He suddenly recognized the occupation as “Pharaoh’s army.”

“We have to see our gathering as an impetus for action,” Waskow said at last week’s seder. “What can we do to resist the pharaoh of this generation?”

Waskow, founder of The Shalom Center in Philadelphia, said the pharaoh of this generation is much the same as the one King fought — systemic racism, poverty, materialism, inequality — now personified by President Donald Trump. It is time to recommit to fighting these ills, he said.

“For me, even before the 2016 election, there was a sense that 50 years from King’s death things weren’t moving forward.”

It was early in 2018 when Waskow reached out to Michael Tabor, a Maryland resident and an organizer of the 1969 seder, and his wife, Esther Siegel, to undertake another Freedom Seder.

Tabor was a member of Jews for Urban Justice, a radical group that organized the first Freedom Seder. The group was anti-Vietnam War and anti-establishment. Tabor said the Jewish establishment was hostile to the young activists organizing the 1969 seder. This year, the seder was funded in part by the Jewish Federation of Greater Washington, he said.

This year’s seder was held in the basement of Silver Spring (Md.) United Methodist Church. Siegel said organizers had contacted the church to participate because of the large “Black Lives Matter” sign on its lawn. The nearby IMAAM Center, a mosque, also participated, as did a couple of other Washington-area Jewish organizations.

The seder participants skewed older and more Jewish than the 1969 celebration. Several attendees had also been at the Freedom Seder.

One was Rep. Jamie Raskin (D-Md.) who was 6 when he came to the seder with his father.

At the anniversary seder, he told the gathering, “Passover is a holiday that calls us to identify with the slaves, the other, the downtrodden.” Politics, he added, is an endeavor that frequently vacillates between power and justice. “Passover calls us back to the justice side.”

Imam Fahmi Zubir told the gathering that anonymous letters in Britain had declared April 3 “Punish a Muslim Day,” with a point system for various acts of violence committed against Muslims.

“There are terrorists in every community,” Zubir said. “And a terrorist is just a terrorist. He or she is not following the commandment of any religion.”

Waskow’s do-it-yourself haggadah for the 1969 seder was an innovation. The once-radical act has been credited by the Center for Jewish History in New York and the National Museum of American Jewish History, which hosted its own Freedom Seder with Waskow in Philadelphia two weeks ago, with influencing activist-focused seders in the 50 years since.

As the seder ended last week, Waskow said he had been invigorated.

“The energy was electric. Maybe not quite as electric as the first one, which was the first anniversary of Martin Luther King Jr.’s death,” he said. “[But] it felt very exciting to be renewing the old and also moving forward.”

Hannah Monicken is a senior writer with Washington Jewish Week, an affiliated publication of the Jewish Exponent.

Opinion | A Message to Poway, From Pittsburgh, Six Months Later 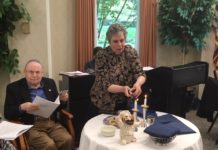 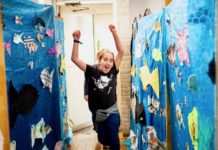