Ten-year-old Adam is lonely. At home, in the Jersualem neighborhood of Givat Massuah, his parents — still grieving for Adam’s older brother, who died in a car accident a year ago — barely notice him as he gathers his things and leaves.

At school, he’s bullied by a pack of tough kids, who since his brother’s death have taken advantage of the weakness they see in the quiet doe-eyed Adam. He doesn’t fare much better with his teacher, a supercilious grump who fears that Adam’s poor academic performance will compromise his status as a star educator.

After school, Adam sits on the roof of his apartment building with only his smartphone as company, watching a video of himself and his dead brother, Assaf, teasing each other in happier times.

If ever there were a child who needed a friend, it’s Adam. And he gets a friend — one who brings plenty of complications.

In the tradition of Spielberg’s E.T., Miyazaki’s My Neighbor Totoro and even Netflix’s Stranger Things, the Israeli film Abulele tells what happens to Adam’s family and community when Adam, played by Yoav Sadian Rosenberg, is befriended by a gigantic creature who can’t really talk but has a penchant for high-fructose corn syrup.

The hulking, furry creature with cat-like green eyes is only visible to certain children at certain times; adults who want to track them have to rely on a heat signature. And while Adam and the Abulele become friends, play catch, share sweets and build a bond — defeating some bullies in the process — the Israeli police assembles an elite squad of hunters to kill the Abulele and any other creatures of its ilk. While the Abulele evades capture with Adam’s help, Adam has to alternately hide the monster and persuade family and friends that the monster exists. His father, for one, is skeptical: “Adam, only babies believe in monsters,” he says.

Directed by Jonathan Geva and released in Israel in 2015, Abulele, which won numerous awards on the international festival circuit, now gets an American release through Epic Pictures — first as an exclusive opportunity for Amazon Prime subscribers during the week of Passover, and then in wide release online.

The co-founder of Hollywood-based Epic Pictures, Israeli Shaked Berenson, said the company initially acquired the film thinking they would do an English language remake.

“But because the movie’s so fantastic, we decided to put it into a lot of festivals,” he said, “and we released it in France, in Poland and in a bunch of other countries. It premiered in America in the Toronto Film Festival last April.” 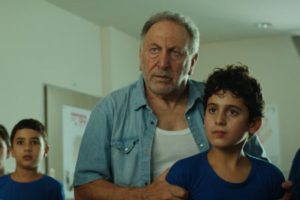 The response was almost uniformly enthusiastic, as it was when the company released the film theatrically in Latin America.

“We’re still thinking about a remake,” Berenson said, but they’re going to wait to see how the general U.S. audience reacts first.

Indeed, while the film was a natural fit for plenty of Israeli-themed film festivals in the United States — including Philadelphia’s in 2017 —  it’ll be interesting to see what a non-specialized audience makes of it. While it offers a heartwarming tale of an unconventional friendship, it also presents a view of Israel that many Americans aren’t usually privvy to. Unlike the massive Israeli hit Foxtrot, now screening at the Ritz Five, which is a surreal, sometimes critical vision of Israel’s military culture, Abulele showcases the most normal, pedestrian version of everyday life in Jerusalem, divorced from war or conflict.

Adam goes to an average school that looks and functions like any school you’re likely to see in America, whether on film or in real life. Children sit at their desks and wait impatiently for recess; they moan with irritation at the mention of a pop quiz. Adam and his middle-class family live in an apartment that could be in an East Coast city just as easily as Jerusalem; he and his brother tease each other about sports as siblings have done since time immemorial. Sweeping aerial shots of southwestern Jerusalem show the tops of apartment buildings, cars on busy streets, Coke signs on the front of a corner store. It’s refreshing to see a vision of Israel that’s not overwrought or laden with symbolism.

Though Berenson lives in the United States now, he is cognizant of how outsiders see Israel, which is something that’s come up for him both professionally and personally.

“We actually released a horror movie that was shot in Jerusalem a couple of years ago, and it’s a genre film, a zombie film, but one of the things the director tried to do was show the city through the eyes of a tourist, seeing different aspects of the culture,” he said. He also spoke about giving a Jersusalem tour to a churchgoing friend, someone who appreciated the specialty knowledge of a local. With this film, however, he didn’t really think about the issue of Jerusalem’s portrayal as much, as it is a family film with universal themes. And, indeed, the  similar reactions to the film around the world — whether in Berlin or Bolivia — has been less about Israel as location and more about the film’s core narrative.

“Although the environment is foreign and the language is also foreign, the characters and what they’re going through is very relatable,” Berenson said. “It deals with a loss of a child and how the family deals with that. … It’s a universal theme in family life and I think that’s why it’s resonant with people everywhere. I don’t think it’s in spite of the foreign environment or because of the foreign environment. I think it’s just there as an interesting tapestry for the story, but at the end of the day, it’s a very human story that the director presents.”

As for distribution here, Berenson said they’re not expecting to garner a huge audience with a subtitled movie, which is a notoriously hard sell for Americans.

“We’re basically bringing it for Jewish and Israeli families here,” he said, adding that he certainly would be glad if it got a wider audience than that.

“It’s very hard to find a family film that you can watch with the parents, the grandparents and also the kids. Because it deals with both issues of the family and the kids hiding the monster, it kind of speaks to everyone. I hope everyone is going to enjoy it this Passover.”