Haggadah means “telling,” and different versions of the Passover seder script, translated and retold in countless languages countless times, can certainly be telling about the state of the world.

And this year’s crop of new haggadahs and supplements are certainly no different. Though the reading of the haggadah is a custom thousands of years old, these are all relatively young, as they place this ancient story in a contemporary context.

Welcome to the Seder: A Passover Haggadah for Everyone 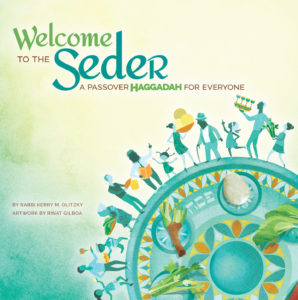 Many modern seders have guest lists that include non-Jewish family, friends and neighbors. Enter Welcome to the Seder: A Passover Haggadah for Everyone, published by Behrman House, which aims to open its arms to multicultural, interfaith and unaffiliated families. Written by Rabbi Kerry Olitzky, former executive director of Big Tent Judaism, and illustrated by Israeli artist Rinat Gilboa, this haggadah includes quotes, poems, readings and stories meant to supplement the traditional texts and create a more inclusive ceremony. For example, the page for urchatz, washing, contains paragraphs about the importance of water in other cultures — namely, baptisms in Christianity and cleansing rituals in Native American tribes.

The Trump Passover Haggadah: “People All The Time They Come Up And Tell Me This Is The Best Haggadah They’ve Ever Read, They Do, Believe Me” 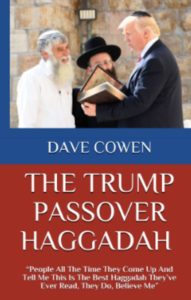 From Dave Cowen, whose bylines can be found in The New Yorker and McSweeney’s, comes a haggadah probably not meant for the Trump supporters at your Passover table. This haggadah imagines the president and a cast of characters from his administration coming together for a seder led by the chief executive himself. When Ivanka and Jared Kushner’s kids request that their “President Zayde” come to their seder, he agrees, despite a previous seder he attended with Madonna that bored him to tears, on the condition that he gets to lead it.

Next Year in a Just World: A Global Justice Haggadah 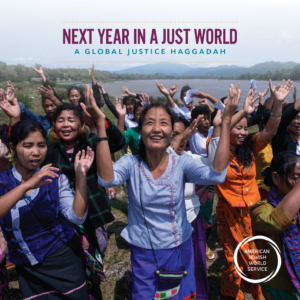 For the past several years, AJWS has put out an updated version of its haggadah. This year, the organization also offers a new, additional insert, An Exodus in our Time: A Reflection on the Rohingya Crisis for the Passover Table, as well as readings on various parts of the seder, such as the four children, the plagues and the four glasses of wine. This haggadah highlights the work AJWS does around the world, alongside photos of the communities it helps support. At the beginning of the haggadah, AJWS President and CEO Robert Bank writes that the purpose of Passover is to internalize the story so that it is as though we were slaves in Egypt. This haggadah is meant to take it a step further and connect the Passover story with people who are currently suffering around the world. 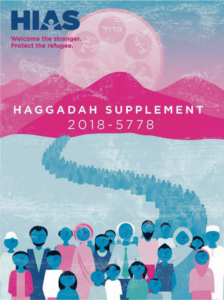 In light of the Passover story of fleeing slavery and searching for safety, HIAS created a haggadah supplement to tell contemporary stories of refugees escaping violence and contributing to their new communities. To honor refugees, this supplement includes new customs, like leaving shoes at the doors, and refugee-related interpretations of old Passover traditions, such as dipping karpas in salt water while remembering the plights of refugees whose stories involve traveling through water.

Repair the World and Be’chol Lashon 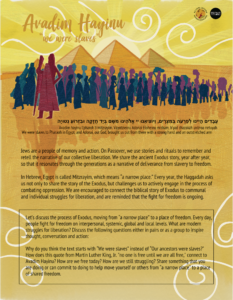 Repair the World and Be’chol Lashon have released a haggadah supplement for this year’s Passover called Avadim Hayinu, “We were slaves,” which encourages seder participants to ask questions about how we are free today and how we are still struggling. They also released trivia cards meant to highlight the diversity of the Jewish people. These trivia cards provide information on different Jewish ethnic Passover traditions, such as the Middle Eastern custom of whipping seder attendees with scallions and the Tunisian custom of placing a bowl of live fish on the table.

The Seder Plate: A New Consideration 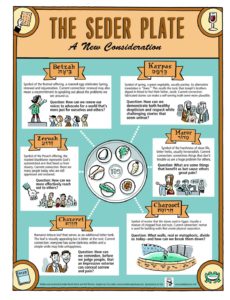 For a Haggadah addition with a local connection, Kobrin teamed up with Wernick and LaBan to create a supplement that connects the symbols on the seder plate with contemporary issues. The supplement provides an explanation for each of the seder plate items, then adds a modern-day connection and question. For example, the supplement provides a typical explanation for karpas, a symbol of spring, and also adds that the word means “linen” as well. Because of the connection to the story of Joseph’s brothers dipping Joseph’s tunic in blood, the supplement encourages using karpas to discuss fabricated stories.