Celebrating Purim is more than just eating hamantaschen and twirling groggers. There’s one famous character whose ethnic identity may get overlooked: Esther.

This year, to add to your mishloach manot goodie bag, Repair the World, Jewish Women’s Archive and Jewish Multiracial Network are honoring the legacy of the Jewish woman who bravely saved her people from the evil Haman in ancient Persia.

The Purim cards, which can be sent through Repair the World’s website, highlight nine Jewish women of color whose accomplishments and lives have made a mark on the world.

“[Esther] envisioned what could be and fought for that more just future,” noted Rebecca Katz, education director for Repair the World. “She kept striving for a future of freedom and liberation.”

This campaign created a chance to re-envision and reflect on Esther’s legacy and how she resonates in today’s world.

The organizations have worked together in the past for different holidays; Repair the World and Jewish Multiracial Network created a haggadah insert last year for Passover that took the Four Questions and gave them a social justice twist. The three organizations are also all part of the Jewish Social Justice Roundtable.

A few months ago, they began exploring how to celebrate Purim as well as elevate Esther’s intersecting identities as a Persian Jewish woman of color, Katz said.

“To think of how the story of Esther can be interpreted today is really a wonderful opportunity,” she added.

The women on the cards include Rabbi Angela Buchdahl, the first Asian-American rabbi and cantor; Rabbi Dianne Cohler-Esses, the first female rabbi from the Syrian Jewish community; Carolivia Herron, an African-American Jewish author, educator and publisher; Yavilah McCoy, CEO of nonprofit DIMENSIONS Educational Consulting; Rachel Sumekh, the founder and CEO of Swipe Out Hunger; and many more inspirational women.

It was hard to narrow down the list, noted Mikki Pugh, Jewish Women’s Archive director of programs and education.

“We had a long list and went back and forth about whether we wanted historical examples as well as contemporary and landed on contemporary because there are so many inspiring women out there doing so many things in different fields,” she said.

And while the women on the cards may already be recognized locally for their achievements, Pugh hopes the campaign will spread their stories and accomplishments even more widely.

“Being a Jewish woman of color is obviously central to this campaign, but these are just women who are doing extraordinary work,” she said. “They’re breaking stereotypes, but they’re also just doing their everyday work.”

Katz added she hopes women, transgender and nonbinary individuals participate in the storytelling archive so “that we build this tapestry of stories from Jewish women of color, and Sephardi and Mizrahi women so they become part of the narratives of our Jewish community; that we no longer have a white Ashkenormative Jewish narrative that we share as our primary narratives in the American Jewish community and we celebrate those narratives.”

Reinforcing the idea that not all Jews are white is important to Rabbi Julie Greenberg of Congregation Leyv Ha-Ir ~ Heart of the City.

“Historically, the majority of Jews had brown skin,” said Greenberg, who has been on the board of the Philly-based Jewish Multiracial Network for many years and is “the mother in a Jewish multiracial family.”

In Israel, she added, before the influx of the Russian Jewish community, a large percent of Israelis were Jews of color.

“But because in this country, many Jewish immigrants came from Eastern Europe, we tend to have this perception that Jewish equals white,” she said. “Actually, the Jewish community is a multiracial community.”

She hasn’t sent the Purim cards herself — though she’s making her mishloach manot goodie bags this weekend — but said “it’s wonderful to put images of the true colors of Jews out into the world.”

Men, too, can appreciate the achievements of the women featured on the cards.

“What can’t people learn from their stories?” asked Jared Jackson, founder and executive director of the Philly-based organization Jews in All Hues, which did a workshop with Jewish Women’s Archive in summer 2017 about women of color. “There’s a good variety here, a lot of diversity within these nine cards. At the same time, there are a great deal more Jewish women of color who have yet to be highlighted, have yet to be acknowledged, have yet to be supported. … This is just a sampling of that — an important sample, I would say.

“There’s probably some multi-heritage brown Jewish kid out there who’s going to look at these and have their world opened up.”

For those who think these women popped out of nowhere, he added, it’s important to realize that isn’t the case.

“It is vitally important for the Jewish social justice community to recognize that Jewish women of color have been doing a great deal of lifting personally and professionally for a very long time,” he said. “Lifting up leaders in a general sense but also being inspirations for even people like myself who’s a Jewish man of color and multiracial and multi-heritage and being co-conspirators in liberation.”

Katz encourages people to send the cards to those in their lives who inspire them.

“I can only speak for myself, but it’s been really a challenging, exhausting time lately,” she said, “and reading the work of these incredible nine Jewish leaders who we featured gives me heart to continue moving forward. So [the cards are] for people to share them with the women and people who inspire you, people who need that extra push of support, to women and people who you love in your life, and to people you want to build community with.” 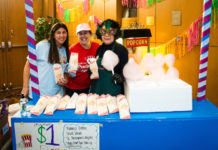 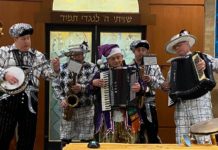 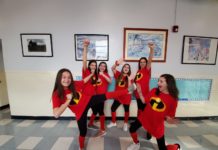