“My non-Jewish friends nodded politely: ‘That sounds really interesting … .’ Non-observant Jews looked puzzled: ‘Aren’t there, like, a thousand of those? I guess you won’t be doing much else this year.’ Observant Jews shrugged, as if to say, ‘Welcome to our world. Want a trophy?’” Pogrebin wrote.

Pogrebin will speak at Congregation M’kor Shalom in Cherry Hill, N.J., at 4 p.m. on Feb. 25 about the journey she undertook to better understand Jewish holidays and Judaism.

Beginning with Rosh Hashanah in 2014 and continuing to Rosh Hashanah of the following year, she spoke to more than 60 rabbis and scholars from different denominations to learn more about the Jewish holidays and make them relevant to her life. The New York-based writer originally chronicled the experience in a series for The Forward, but at the end of the year, she felt she had a lot of content she still wanted to share, prompting her to write a book.

“I saw, as anyone does when you dip a toe into Jewish tradition, that this has lasted for a reason,” Pogrebin said. “It’s just too demanding to have endured this long without somehow speaking back and offering meaning to people. It intrigued me. It actually moved me. I found it quite compelling that something so ancient could be so resonant, and I wanted to understand it.”

Growing up, Pogrebin never attended Hebrew school or had a Bat Mitzvah. She said this lack of Jewish education didn’t bother her until she had her first child in 1997.

“That began to sort of be the beginning of a frustration that, here I was, creating, or co-creating, a Jewish family without being able to define it for my children,” Pogrebin said.

Around the same time, she was working on her first book, Stars of David: Prominent Jews Talk About Being Jewish, where she asked famous Jews, such as Steven Spielberg and Ruth Bader Ginsburg, about their Jewish identity and observance — questions she struggled with herself.

To prepare for these interviews, she started learning about Judaism by studying the Torah with a rabbi. She eventually had a Bat Mitzvah in 2005 and joined Central Synagogue in New York City in 2006.

“Something was still missing,” Pogrebin said. “What I felt lacking was this architecture of a Jewish year, which was, becoming clearer and clearer, what anchored a Jewish life.” 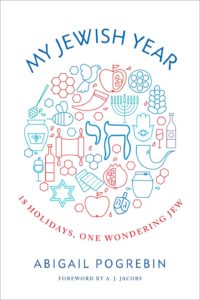 During this year of observance, she experienced a lot of firsts: She went to a mikvah, danced with the Torah on Simchat Torah and studied all through the night on Shavuot.

She learned how interconnected the holidays are and how often mourning and celebration go hand-in-hand, such as how Israel Independence Day immediately follows Yom Hazikaron. The strong sense of community in Jewish holidays stood out to her as well.

“I learned how many of these holidays demand that we look into who is in a harder place than we are … a constant charge that runs through these holidays,” Pogrebin said. “To look within your own family, but also across the ocean, at who is suffering and what can you do to alleviate that suffering in even a small way. There is something asked of us in so many of these holidays. Even when they’re celebratory, we’re supposed to be paying attention, often to who we lost or who is struggling.”

Marcia Waldman, chairperson of the event, said after reading My Jewish Year last summer, she asked Pogrebin, whom she knows from summer camp, to speak at Congregation M’kor Shalom. Waldman said she found the personal nature of the book meaningful.

“There are other books about Jewish holidays that are just, ‘Here’s the holiday, here’s what you do during the holiday, here are some activities you can do, here’s the historical value,’” Waldman said. “That’s not the perspective that she took. … She recognized that she didn’t have a real understanding of the full life cycle of events through the year, that there were so many more holidays that dictate what a Jewish year is. She wasn’t looking to suddenly go from much less observant to being a fully observant Jew, but to have a better understanding of what it means … to be a more fully engaged and practicing Jew.”

With this year of observance behind her, Pogrebin said, her Jewish journey is not over. For the most part, she follows the customs and observance of her Reform congregation, but she’s still learning outside of that.

“For all of us, this is a work in progress,” Pogrebin said. “We’re all making choices all the time, every year, every day, every holiday. That’s not an excuse — it’s more of a reality that I’m constantly deciding what I want to do, where I want to go, how deep I’m getting in this.”