Actors and actresses ranging from ages 7 to 75 have worked together for months at Adath Israel to put on a semi-professional production of Disney’s Beauty and the Beast, forming intergenerational friendships that go beyond the surface.

Adath Israel Players will put on four productions of Beauty and the Beast on Feb. 24 and 25, and March 3 and 4.

“Beauty and the Beast is really a reflection of the Jewish value of looking deeply,” Adath Israel Players Director Lisa Litman said. “There’s a Jewish phrase from a Talmudic sage, and the phrase says, ‘Do not look at the jug, but rather at what is inside.’ This teaches us that we can’t take anything at its external value, and it’s a person’s internal value that’s important.”

Litman took this value into consideration when selecting the musical for this year’s production. Every two years, the troupe puts on a show, which in the past has included productions of Guys and Dolls, The Wizard of Oz and Joseph and the Amazing Technicolor Dreamcoat. This year’s show includes professional sound and lighting, a professional orchestra directed by Lee Milhous, as well as hand-built sets.

In advance of the performance, the cast went to Brith Sholom House to do a performance for the senior citizens. Adath Israel also put on a “Bagels and Books with Belle” event for children to listen to Kate Cohen, who plays Belle, read.

The famous story of a woman’s love for a beast turning him into a prince might not seem to have much of a Jewish connection on the surface.

But, Litman said, Beauty and the Beast teaches several Jewish values. Besides looking deeply, it also contains messages about honoring your parents and the importance of community.

“Even when the show itself isn’t Jewish, we want to make sure that the story teaches us something,” Litman said. “This year, with Beauty and the Beast, there’s a fantastic lesson to learn.”

“It’s really relevant to the #MeToo issue today in society, in that the transformation of a man from a beast into a prince, and [as] the result of enchantment and transformation [he turns] into a more sensitive and enlightened being,” he said.

The cast has been rehearsing for these performances since November.

Litman, the tech crew and the set designers started working on the show last March.

One of Polis’ favorite part of the rehearsals leading up to Beauty and the Beast is how the less-experienced cast members get to work alongside the professional elements of the production.

“The cast is comprised of lawyers, doctors, IT professionals, consultants, educators, independent business professionals and people from all walks of life sharing the joy of the love of the arts and theater,” he said.

Producer Darlene Cohn, who plays a village woman and a napkin in the “Be Our Guest” scene, said the show has a high level of professionalism, despite being a synagogue production.

Litman, for example, has a background in television and theater, and Cohn herself has some experience as a stand-up comic.

She said that, through being a part of this organization, she had the opportunity to form friendships with people she wouldn’t have ever been friends with otherwise because of age differences.

“It’s an amazing way to meet people you would never necessarily meet,” Cohn said. “When you’re in a synagogue, you tend to stick to the people who do the things that interest you, because either it goes by age or the age of your children, and this brings in a whole mix of people from a variety of ages. I’m hanging out with my new best show friend, who’s a 33-year-old mother of a 9-month-old, who I probably wouldn’t have paid attention to a year ago.”

The minimum age for joining the group is just 5. The children in the show participate as a children’s choir and perform “Belle” and “Be Our Guest.” They also play wolves that live in the forest around the Beast’s castle. Most of the cast is in the 50s-and- up crowd, Cohn said, but this year’s cast includes some younger adults as well, such as Cohen.

Litman said anyone interested in joining Adath Israel Players, an organization open to both synagogue members and non-members alike, can reach out via [email protected]

“We have a group of people who come from all different backgrounds, have all different kinds of jobs, all different levels of experience,” Litman said. “When they come together for this show, they come alive in a new way and create something brand new. It’s hard to describe that feeling of creating something as a group.” 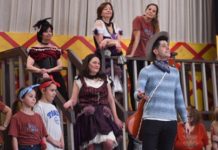 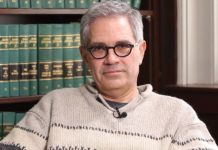