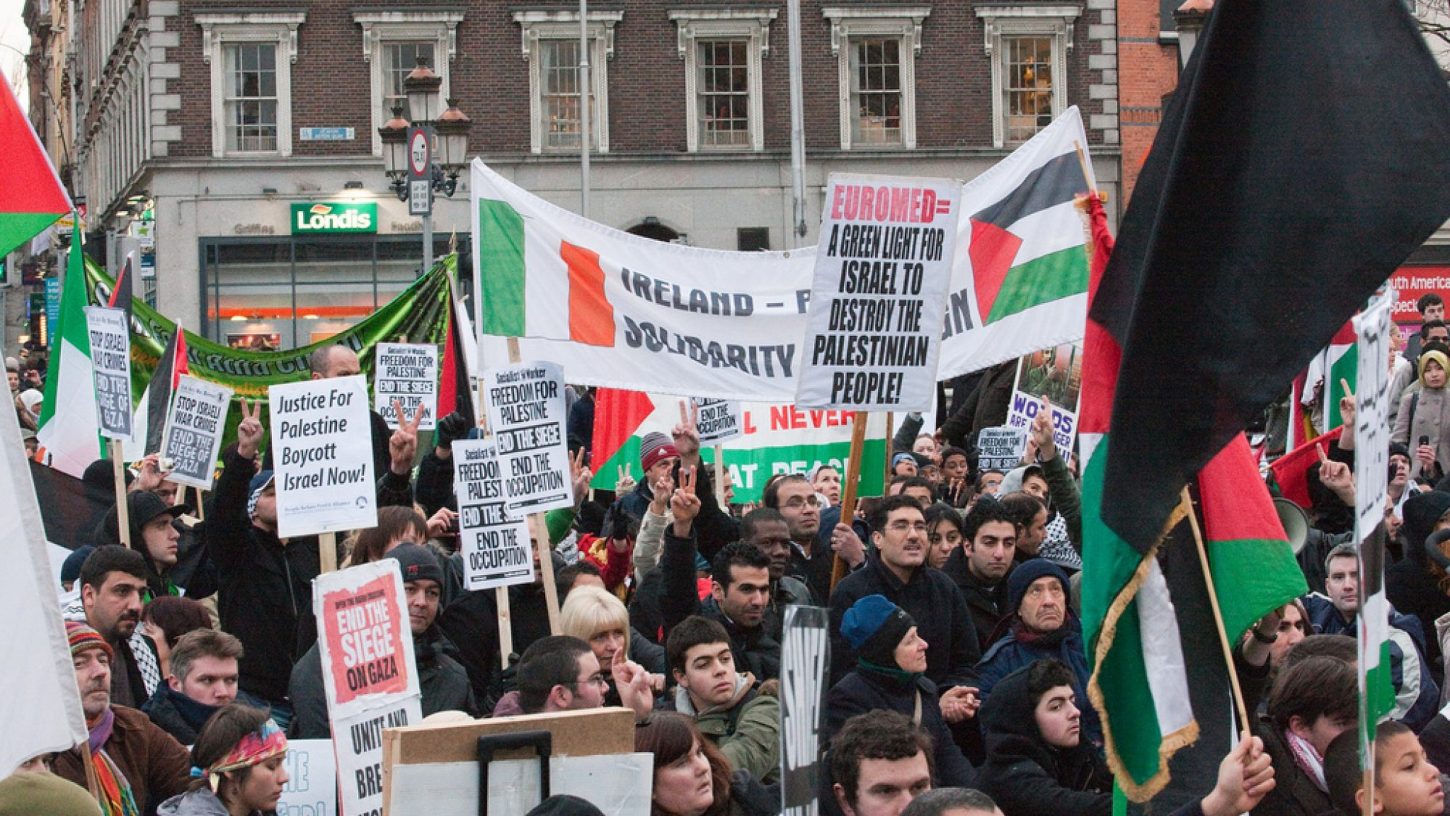 The Irish and Jewish people share a common history of suffering cruel persecution and achieving national redemption against immeasurable odds. But today, modern Ireland is one of Europe’s fiercest critics of Israel. This tension was on display last week as the Irish Senate was considering legislation aimed at criminalizing trade with Israeli settlements.

The legislation, titled “Control of Economic Activity (Occupied Territories) Bill 2018,” calls to “prohibit the import and sale of goods, services and natural resources originating in illegal settlements in occupied territories,” according to Sen. Frances Black, the bill’s sponsor.

While the vote on the legislation was eventually postponed, many in Israel saw it as another example of the growing effort in Europe to single out and boycott the Jewish state.

Israeli Prime Minister Benjamin Netanyahu’s office said that the legislation’s “sole purpose is to support the BDS movement and harm the state of Israel.”

The Israeli Embassy in Ireland also denounced the bill, saying that it “only offers an incentive to those who wish to boycott Israel and stands in stark contrast to the guiding principles of free trade and justice.”

Orde Kittrie, a professor of law at Arizona State University and senior fellow at the Foundation for Defense of Democracies, told JNS that the proposed legislation was clearly aimed at delegitimizing the state of Israel.

“On its face, the bill is about pressuring Israel to evacuate the West Bank and turn it over to Palestinian rule. However, as in so many cases of BDS, it appears the goal was at least also a broader one: to contribute to delegitimizing the state of Israel,” he said.

A spokesman for the Irish pro-Israel group Irish4Israel said that the bill was also backed by several anti-Israel NGOs, including Christian Aid and Trocaire, in addition to trade unions in Ireland.

“The bill was endorsed by trade unions and others, and had the support or many smaller parties. The motivation is a naive hope to show solidarity with the Palestinians,” the spokesman said.

In the days leading up to the vote, a debate emerged in Ireland over impending economic consequences for the country if it went ahead with the legislation. Of particular concern was the possibility that the legislation could run afoul of both E.U. and U.S. law, potentially jeopardizing critical ties.

“This bill would make U.S. companies with subsidiaries in Ireland, Irish companies with subsidiaries in the U.S., and their employees who are Irish or resident in Ireland, choose between violating the Irish law or violating the U.S. Export Administration Regulations,” said Kittrie. “Violations of these U.S. antiboycott laws are punishable by fines and by imprisonment for up to 10 years.”

As such, in requesting the postponement of the vote on the bill, Irish Foreign Minister Simon Coveney noted that the bill may violate an E.U. law that all members have a common commercial policy. Coveney also expressed concern that the bill would harm relations with Israel and thus Ireland’s ability to play a constructive role in the Middle East peace process.

Current E.U. law stipulates that Israeli products originating from beyond the pre-1967 lines cannot be labeled as “Made in Israel.” Israel considers the West Bank to be disputed territory, with borders to be determined in any peace negotiations with the Palestinians.

Nevertheless, despite the delay and concerns, Kittrie believes that the bill will eventually pass, especially if the peace process continues to stall.

“Watching the debate in the Irish Senate, it appears that the majority of Irish Senators are far more sympathetic to the Palestinian perspective than the Israeli one,” he said.

“A version of the bill, presumably one revised to remove the conflict with E.U. law, seems likely to pass when it is voted upon in four or five months, unless there is significant progress on the peace process or the Irish Senate becomes more sympathetic to the Israeli perspective or the Irish Senate comes to better understand how the bill, if enacted, would gravely undermine Ireland’s economic links to the United States,” he said.

But how did the Irish, who like the Jewish people have also faced centuries of persecution, end up so sympathetic to the Palestinian cause?

Much of Ireland’s sympathies for the Palestinians appear to tie back into their own troubled history with the United Kingdom.

“The Irish see Israel as acting as the U.K. did when it occupied all of Ireland [until Irish independence in 1921] and Northern Ireland until the present day,” said Kittrie. “Specifically, they analogize Israel’s settlements in the West Bank to the Protestants from Great Britain who settled in Northern Ireland.”

Irish-Jewish relations haven’t always been this sour. In the early 20th century, many Irish leaders were sympathetic to the Jewish people, with the Irish drawing heavily on historical parallels with Jews, including their suffering, the large-scale migration of Irish in the 19th century and their upward struggle for national self-determination against the British.

But following Israel’s independence in 1948, Irish sympathies inexplicably shifted. The Irish no longer viewed Israel as the underdog struggling for national rights, but instead as a foreign occupier on someone else’s land — the Palestinians — similar to the Irish experience with British control over Northern Ireland.

Ireland did not extend recognition to Israel until 1963 and did not establish an embassy in Tel Aviv until 1996. Furthermore, Ireland was one of the first European countries to call for a Palestinian state in 1980 and has insistently focused on the Palestinian refugee issue.

Today, despite its subordinate position within the European Union behind such larger powers as France and Germany, Ireland has played an outsized role as a voice on matters concerning Israel and the Arab-Israeli conflict. Last year, the Irish Parliament passed a symbolic resolution calling on the government to recognize Palestinian statehood. Ireland was also the first European country to recognize the Palestine Liberation Organization as well.

At the same time, the BDS (boycott, divestment sanction) movement in Ireland is viewed by many as some of the most powerful groups in Europe.

The Ireland-Palestine Solidarity Campaign (IPSC), which has been at the forefront of anti-Israel sentiment in Israel, recently led to Israel banning some 20 activists associated with the Dublin-based group from entering the Jewish state as part of a recent “blacklist” by the Israeli government targeting anti-Israel BDS groups.

“It’s an Irish obsession to identify with the perceived underdog. It’s very disappointing and a complete distortion of the facts on the ground,” the Irish4Israel spokesman said. “If Israel wants to change the Irish mentality towards Israel, it needs to engage with Ireland more.”

Can Irish eyes smile on Israel?

However, one major looming challenge in engagement are recent reports that Israel is mulling closing down its embassy in Ireland as part of plans to shutter seven embassies worldwide due to budget concerns, Yedioth Ahronoth reported.

Israel first opened its embassy in 1996 — one of the last countries in the E.U. to have an Israeli embassy — after years of negotiations. Despite strained political relations since then, trade between Ireland and Israel has grown significantly as both countries have become global leaders in areas such as technology and pharmaceuticals. In 2016, Israel was Ireland’s 11th-largest export partner, with $1.63 billion.

Despite growing economic ties, Kittrie believes that Israel needs to improve its outreach to the Irish if the Jewish state hopes to improve relations with the country.

“Israel has a good story to tell. It needs to do a far better job of telling it to the Irish people,” he said.

“Watching the debate in the Irish Senate, one would think that the lack of peace between Israel and the Palestinians is entirely the fault of Israel. That is just not true. I think education has a big role to play in improving relations between Ireland and Israel.”