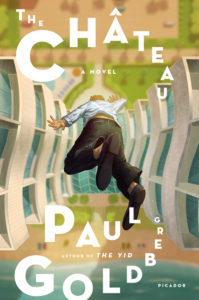 A president with deep pockets full of secret connections and bribes.

It sounds like America in 2018, but it’s also the setting of The Château, the newest novel from Paul Goldberg, author of The Yid. It largely takes place at a luxury condo building in Florida, with a majority of Russian-Jewish, Donald Trump-supporting inhabitants, with a board of directors with new seats to fill — and leaders who will do what it takes to keep their own seats filled — and one man’s determined effort to assume the role of vice president.

It begins with the death of Bill Katzenelenbogen’s college roommate, a successful plastic surgeon known as “The Butt God of Miami” who plummeted 43 floors to his death from a high rise. Was it an accident? Was he pushed? Bill, who until recently was a successful reporter for The Washington Post, aims to find out, as now he really doesn’t have anything else to do.

With less than $1,300 in his bank account, finding accommodations in Florida will be tricky — so he has to stay with his father, Melsor, in his building, the Château Sedan Neuve, to whom he hasn’t spoken in many years.

Goldberg has a certain flourish with words, creating a lively tale in a microcosm of Trump’s (or Donal’d Tramp, as the Russian residents call him) America. The story all takes place in the week leading up to Trump’s (or Tramp’s) inauguration.

It’s littered with witticisms and observations of the perhaps irony that a building of immigrants would be so enthusiastic about Trump. But again, as the narrator — who sometimes breaks the fourth wall — points out, this is Florida.

“It stands to reason, subtly, weirdly, that a high-rise almost certainly dominated by immigrants would be a bastion of Trump’s brand of xenophobia,” Goldberg writes. “Where is it written that people must love their own kind?”

There are also observations about Jews, as many are Jewish, including Bill and his father, though Bill only identifies as culturally so. When Melsor accuses a current board member of being fascist, Bill wonders how that can be so as the guy is Jewish.

“So? Fascists can be Jews. Why not?” his father answers.

As Bill tries to investigate his friend’s death, he falls into the strange situation unfolding in his father’s condo building with exploding pools, shady deals with a construction contractor whose acronym is ICII but Melsor calls it ISIS, Lexuses as far as the eye can see, and plenty of vodka (including a fictional one made in South Philly).

The writing is lively, the characters eccentric, the plotline captivating. The “Butt God” plot, however, becomes less urgent, as Bill gets more and more involved in his father’s quest for a seat on the board.

Interlaced with Russian conversations and poems (as Bill translates poems his father — a literary scholar, poet and former adjunct professor — writes throughout the story), the novel is a peek behind the closed doors of one society in which its inhabitants have overcome hardships and tribulations to find freedom and a new life.

It’s creative and darkly funny at the right moments, and showcases Goldberg’s prowess for language, as did his debut novel last year.

A Horse Walks into a Bar | David Grossman | $15.95 | Vintage International

If challenging reads that explore the darker side of life appeal to you, consider David Grossman’s A Horse Walks into a Bar. 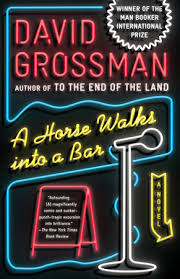 Now available in paperback, the book, which won the 2017 Man Booker International Prize, tells the story of disgruntled (and aging) 57-year-old comedian Dov Greenstein as he chronicles his life one night over two hours in a Netanya, Israel comedy club. A judge named Avishai Lazar narrates the story; he knew the comedian as a teen, but hadn’t spoken to him in 40 years.

Standup denizens will recognize Greenstein’s shtick immediately, but readers will also soon detect the bitter tone in his remarks — a tone not that uncommon with comics, as they point out the foibles of society.

But you may likely develop a sense of empathy toward him as he describes a defining moment in life — a difficult choice had had to make between two beloved people.

Grossman manages all this in less than 200 pages.

“A Horse Walks into a Bar shines a spotlight on the effects of grief, without any hint of sentimentality. The central character is challenging and flawed, but completely compelling. We were bowled over by Grossman’s willingness to take emotional as well as stylistic risks: Every sentence counts, every word matters in this supreme example of the writer’s craft,” he said.

That said, A Horse Walks into a Bar isn’t for everyone. The unrelenting tone makes the book a downer, and the main character is so acerbic that it’s possible some readers simply won’t care about his story. 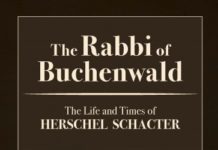