It couldn’t exactly be called a fad, but North America’s Chasidic community has garnered a lot of attention of late.

On TV, in magazines, in online specials and in movie theaters, Chasidic communities have been profiled, photographed and insistently “revealed,” with coverage of everything from Chasidic fashion choices (Refinery 29; HuffPost Live) to Chasidic sex lives (OWN).

In 2014, Félix and Meira, a Canadian film about a Chasidic woman and a non-Orthodox man, premiered at the Toronto International Film Festival. This year, the Yiddish-language Menashe, about the Chasidic community in Borough Park, was released nationwide. The last few years have seen the fictional short film Samuel-613, the documentary Devout and plenty of cable TV programs about the Chasidic experience.

This is all striking, given the small numbers that the Chasidic community represents in the larger Jewish population. It is also striking that so much of the coverage is about leaving the community. In the last five years, there have been eight books published about people who left their communities, seven of them memoirs. In that same time, there have been innumerable TV segments and print articles. 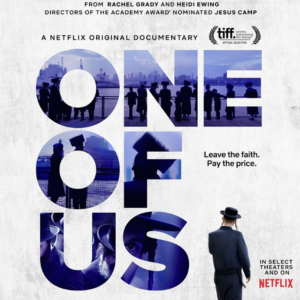 Now there’s a new entry into the ex-Chasidic genre: the documentary One of Us, screening on Netflix and in theaters nationwide. Directed by Heidi Ewing and Rachel Grady, who made the Oscar-nominated Jesus Camp, One of Us has shown at major festivals and garnered nearly unanimous critical praise from mainstream sources. It tells the story of three members of Chasidic communities who go “off the derech,” albeit for very different reasons.

There’s Luzer, who grew up in Brooklyn in a Satmar community, got married and had children, then left it all behind to be an actor in Hollywood.

There’s Ari, an 18-year-old childhood sexual abuse survivor who’s struggling to figure out where he fits in — because he feels he’s living a lie as a religious Jew.

And there’s Etty, a Satmar mother of seven whose husband is removed by New York authorities for alleged abuse but who becomes embroiled in a brutal custody battle even as she’s subjected to continuous harassment by her husband and his relatives.

The three are profiled in verité style, without the benefit of explanatory talking heads or outside sources. They tell their own stories, in their own words, and the viewer watches as they move through their post-Chasidic lives over the course of three years.

Etty’s story is surely the most urgent.

While Luzer is charismatic and funny, there’s nothing much about his leave-taking and new life that we haven’t heard before.

Ari’s journey has touching moments, and his push-pull shows plenty of affection for his community and the way he was raised. Yet it feels familiar.

But Etty’s narrative has broad implications for any religious community.

When the film opens, Etty’s husband has just been removed from their house after Etty has finally given in, after eight years of beatings and verbal abuse, and called the police from a hiding place in her bathroom closet.

Now her husband’s relatives are back at the house, banging on it with hammers, so she calls the police again. “So it’s a family matter?” a lackadaisical dispatcher says. Etty tries to convey the urgency. “I have children here. This is dangerous.”

It was the danger, it becomes clear, that led Etty to make the initial call. This decision — to report a fellow Jew to a non-Jewish, non-rabbinical authority, a violation called mesirah — did not come easily.

Etty was a good Satmar girl who did what she was told growing up. She dutifully married at 18 to a man she met twice for 30 minutes — even though she had reservations. She bore him seven children, and tried to adhere to her husband’s rules and systems for control. As the abuse escalated, she was hospitalized for depression and anxiety, but still, she stayed. By the time we meet her, she has simply reached her limit.

Her intention does not seem to be to leave the community. Rather, she’s taken steps to physically protect herself and her children from violence and is in need of counsel and support. For whatever reason, such support does not seem to be coming from within her community, so she finds a meeting of Footsteps, the support group for formerly Chasidic people.

“I’m terrified,” she says, but there is no one offering her an alternative berth, no sense from the members of her own community that it is her husband — who’s violated halachah as well as secular law — who’s at fault.

In fact, while he is bolstered by community support and a high-priced legal campaign to get custody of the children, she is represented by a lawyer for the indigent.

Because Etty’s story is so important, it’s a shame that One of Us suffers from a lack of specificity that could provide better context. The small fragments of text offer generalizations, starting with: “Hasidim are a highly insular group of ultra-Orthodox Jews. … To separate themselves from outsiders, they dress like their ancestors and speak mostly Yiddish.”

The filmmakers don’t distinguish between Chasidic communities. Rather, all Chasidim in New York are lumped into one big group whose members, we are told, “rely on the state for subsidized housing and public assistance. The community has also created their own ambulance fleet, volunteer police patrol and a private school system.”

While there are many Chasidim who use community ambulances and live in subsidized housing in New York, there are plenty who don’t. The generalizations here are unacceptable, given that the Netflix-produced film is intended for a wide audience.

Surely, One of Us is not the last documentary we’ll see about Chasidic communities.

In the case of One of Us, though, there is more than just a look behind the curtain. It’s the first film to really delve into all the varied challenges of leaving one’s community behind and forging a new life. Without context and clarity, however, it’s hard to accept it as anything more than three particularized experiences. 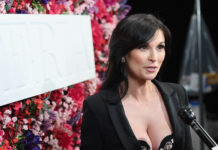