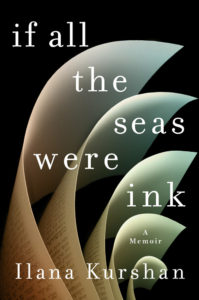 If All the Seas Were Ink

Can you imagine what you’ll be doing seven-and-a- half years from now?

When Ilana Kurshan was coming off of a painful divorce, living in Jerusalem — she’d moved there from New York with her then-husband — a friend suggested she take up daf yomi, a practice in which you read one page of Babylonian Talmud a day.

(It takes about seven-and- a-half years to complete the roughly 2,711 pages in the Talmud, spanning 37 tractates.)

By joining in and creating a schedule for herself, she began anew, living her life tractate by tractate, one day at a time.

She documents her journey — which begins as a newly divorced 27-year-old who moved to Jerusalem with her then-husband and ends as a happily re-married mother of four — by providing commentary on the pages she read, bringing to life the centuries-old rabbis dictating Jewish law in her new memoir, If All the Seas Were Ink.

Memoirs are tricky. A person must be interesting enough to warrant reading a book entirely about him or her. But Seas is a different kind of memoir in that Kurshan did not even want to write it initially. In an interview with the Times of Israel, she said the “last thing I ever wanted to do was write a memoir.”

It began as a series of blog posts, Tablet magazine noted, of her commentaries on what she was reading. Her commentaries could also be found in the margins of her texts as she wrote notes about the lessons and dialogues between the rabbis. She took her books with her everywhere — on the bus, in an airport terminal, to the pool.

But even if you’re unfamiliar with Talmudic text, Seas is an engaging read. It doesn’t come off as a dense, boring academic analysis or research paper. The snippets of conversations and arguments are well-chosen and sometimes even entertaining. The rabbis’ banter comes to life as Kurshan engages with it and it overflows with fitting literary parallels.

Kurshan herself overflows with literary references as a literary translator and former employee in the publishing industry and a literary agency in Jerusalem. She quotes poetry off the cuff, a characteristic that drew attention of her now-husband.

The memoir is mostly focused on her studies but her contemporary life plays out against the ancient Talmudic backdrop. Many times, situations in her life coincide with themes on the page she is reading that day.

She seems careful not to overshare details, a marking of her upbringing, which emphasized privacy, but she still creates an intimate connection. She touches on most aspects of her life: growing up as a rabbi’s daughter in Long Island; a battle with anorexia (which she devotes few pages to but its details stick out nonetheless); the dissolution of her first marriage and the pain it left in its wake; struggling with her own identity after officially making aliyah to Israel; the fear of the unknown when entering a new relationship.

But amid the pain and heartbreak there is hope and humor, and most clearly, passion.

Kurshan’s passion for learning has taken her from Harvard to Cambridge to Jerusalem, and it is contagious. As she marvels over the lessons in the Talmud, the reader can feel her enthusiasm and curiosity. It makes for a compelling read, especially for — but certainly not limited to — students of the Talmud.

The Daring Life and Dangerous Times of Eve Adams