It’s been 54 years since Martin Luther King Jr. had a “dream.”

Concerned clergy of all faiths, including a segment of rabbis and leaders from the Philadelphia Jewish community, assembled Aug. 28 where he spoke of his historic vision in Washington, D.C. , then marched 1.7 miles to the U.S. Justice Department.

They used the opportunity to voice their displeasure with what they perceive as the country’s drastic turning away from the progress toward the racial harmony underpinning King’s famous speech.

“I hope one day I can show my [infant] daughter the pictures of her ima marching and she’ll have trouble fathoming what was going on in 2017,” said Rabbi Beth Kalisch of Beth David Reform Congregation in Gladwyne. “It will just seem like an impossibly different time from where she is by the time she’s old enough to understand.

“But I was inspired being in Washington. As people of faith, we feel a responsibility to be out there in front of the community and to raise our voices. As diverse as our views might be and we see the world in different ways, all of us believe there needs to be a turning around in our country.”

She was hardly alone.

Billed as the One Thousand Ministers March for Justice, estimates said a few thousand showed up for a rally that was uninterrupted by protests or other forms of dissent. Among them was Rabbi David Levin of the Jewish Relationships Initiative, who said the message delivered by Rev. Al Sharpton and Rabbi Jonah Pesner, director of the Religious Action Center of Reform Judaism (RAC), along with speakers ranging from nuns to Indian Sikhs, needs to be carried out back home.

“We need to act on the values so many of us hold dear that are under assault to make sure they’re safe and protected,” said Levin, who rode on a bus sponsored by the Jewish Community Relations Council of Greater Philadelphia (JCRC). “The people I spoke to had a similar takeaway.

“The core message was that we’re here as people of faith and going home we need to put this faith into action. As vile and despicable as anti-Semitism is, we shouldn’t be fearful. There are some cockroaches who’ve crawled out of the woodwork. But being there with everyone reassured me we’re not going to stand for that. We’ll shine the light and make them recede back into the woodwork.”

The other prevalent message from what started off as an African-American tribute to King was one of unification.

“Almost all of the speakers spoke of racism and anti-Semitism being tied together,” said Temple University Professor Rabbi Howard Avruhm Addison, former president of the Board of Rabbis of Greater Philadelphia. “There was a sense of common cause from people of different ethnic backgrounds I haven’t seen in a long time.

“A number of them brought up anti-Semitism and the need for people to stand together. It was well worth the day going there.”

Addison, whose personal history attending such events goes back to rallies supporting Soviet Jewry and speaking about the Six-Day War as a teenager, said what happened earlier this month in Charlottesville, Va., should serve to rally all Jews.

“We can’t be sanguine about the conditions of social justice and human rights in our community,” he warned. “We need to stand with other groups and understand their reality.

“We’ve grown pretty comfortable with our status, so those Nazi torches have been a wakeup call. Now we need to reach out past our own circles and make common cause with people facing economic vulnerability or suppression of their civil rights and work for a solution not based on polarization and hate.”

Kalisch said plans to implement that are in the works.

“My congregation will be participating in the campaign the RAC is organizing,” Kalisch said. “On Shabbat Shuvah [Sept. 22], we’re proud to be welcoming some clergy and members of a few local churches — from Gladwyne and from the African Methodist Episcopal Church — to stand up to hate.

“We want to both be together in fellowship at what has been a frightening time for my community as Jews and for them as well.  We need to think about how we can raise our voices as people of faith to say this is not what America is about and not what God wants for any of us.”

What they encountered in Washington only solidified that.

“And frankly, if you’re an American, you felt like you were under attack. So I was generally thrilled we as a Jewish community found it so important to participate in this.”

While media coverage was minimal due to Hurricane Harvey, those who trekked to the march had no regrets.

Neither does the JCRC, which encouraged them to go.

“The biggest theme was the need to return to a society with social justice and equality,”¸JCRC Assistant Director Abbey Frank said. “Having people of all different faiths and walks of life — Jews, Christians, other minority religions, lesbians, gays — there shows our power in numbers.

“For us, it’s responding to a request from the community to come together and do something. This is the perfect JCRC role to bring people together and stand up in the face of anti-Semitism and racism.” 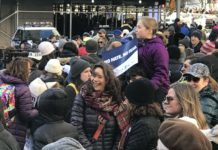