Lancaster Avenue was smoking on Aug. 27 — a savory scent that wafted down the road from Temple Beth Hillel-Beth El.

The cookout started the night before, as contestants prepared four types of kosher meats for the first-ever Hava NaGrilla Smoke BBQ Festival and kosher barbecue competition.

Stu Gordon, organizer of the event — and “BIG RIB,” per the back of his T-shirt — said the event came together with many donors and sponsors.

Even a vegan booth provided alternative options for the less meat-inclined.

The profits, some of which will go to the Mitzvah Food Project run by the Jewish Federation of Greater Philadelphia, added up, as admission was $10 a ticket, mechanical bull rides went for $5 each, event T-shirts were $20 (and sold out), and the line for various barbecued meat sandwiches wrapped around the parking lot for hours, which sold for $10 and up.

An estimated 5,000 filtered in and out throughout the day, which was so jam-packed that most attendees had to park in nearby neighborhoods, or they had the option to drive a mile down the road to the Kaiserman JCC, where a school bus shuttled them to and from the event.

This is the first kosher contest he’s attended and, besides the lack of pork, he said it’s pretty similar to other KCBS contests.

Every half hour beginning at noon the day of the event, teams submitted their boxes of meat for the judges. They started with chicken thighs, then beef ribs, turkey and beef brisket.

The meat was supplied to the competitors as it had to be kosher — not the norm for KCBS contests.

McKee hopes this event is here to stay.

“They’re trying to add inclusion to the Jewish community to have their own events. We do KCBS events, hundreds a year, but we do pork ribs and pork shoulder,” he noted. Kansas City, Mo., Rabbi Mendel Segal started the idea of kosher competitions, and now Philadelphia is one of a handful that make up those contests.

Only five of the 28 judges were kosher trained. The rest are KCBS certified from other states.

“Hopefully, over the years as more of the kosher Jewish community gets certified, we’ll have more and more [judges],” McKee said.

The Center City Smokers set up shop in the Temple Beth Hillel-Beth El parking lot alongside the other teams and started smoking the night of Aug. 26 on the premises after Shabbat.

The team — comprised of Rhona Gerber, her husband Erik Schneiman, and 11-year-old son Eitan — was influenced by a friend in Chicago who introduced them to the barbecue competition world.

“I just like to cook,” said Gerber, “and we like to entertain on Shabbat.” In their Center City home, they squeeze a smoker and a grill in their backyard.

The family keeps kosher, too, and belongs to Mekor Habracha, where Gerber is co-chair of the Center City Kehillah program of the Jewish Federation of Greater Philadelphia.

“It takes a lot to get us out to the suburbs,” she laughed, but the small family team managed to place third for kosher turkey.

The salt-and-pepper-goateed cook with tattoo sleeves on both arms has barbecued for five years.

Hava NaGrilla provided an opportunity for Rumaner to return to his native Philadelphia and reconnect with high school buddies — some he hasn’t seen in 30 years — who also aided him in the competition.

Although his buddies are not Jewish, Grinders added an unofficial name in Sharpie underneath their labeled sign to stay on theme: “Hebrew Skool Dropouts BBQ Team.”

“It’s a cool competition because it neutralizes everybody,” he said, finishing the last shot in a bottle of whiskey (presumably) used in the cooking process. “All the meats [are] given to us. Everything is brand new and kosherized, so it made it a real difficult competition.”

A regular in the barbecue competition circuit, Rumaner said the goal was to win some trophies — Grinders placed fourth overall — but it’s really about community.

“It’s a cool brotherhood camaraderie of meat,” he added. “It’s something that goes back to the Olympic days: man, meat and fire.”

First-place winners included Uncle Morty and the Catholic and the Meatzvah Girls for kosher beef ribs, DFW Kosher Q Crew for chicken, Mount Smokemore for turkey, and Smokin Chutzpah for brisket — the only competitors who belonged to Temple Beth Hillel-Beth El.

But the overall champions were Plum Crazy BBQ — can you guess their secret ingredient? — a non-Jewish team from Warfordsburg on the Pennsylvania-Maryland border that has never cooked kosher before.

Howard Poole, leader of the purple-adorned team, said they were eager to learn what it takes to barbecue kosher.

“It was something unique, something different, so we signed up literally within two weeks of finding out about this,” he said. They prepared for six months leading up to the competition.

“It was a little bit of a challenge,” Poole continued. “Chicken from non-kosher to kosher is different as far as they include the rib section of the bones, which for a typical KCBS cook we don’t do that. So it was kind of a struggle getting through there. … As far as quality of meats go, this is some of the best meat that we’ve handled.”

They placed fourth for turkey and brisket, and won another award for the most passionate team.

“We’ve all been working on this — the entire team — we’ve been putting in a lot of man hours,” he said. “To come this far is an amazing experience.” 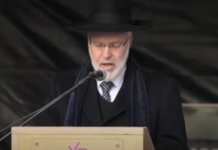 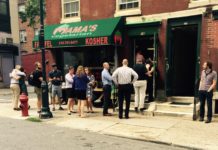