“Let’s get a buzz real quick and then switch to beer,” one middle-aged man suggested to his white-haired buddies less than 50 feet from the entrance of the Wells Fargo Center.

A handful of cop cars were parked by the main doors, surrounded by fallen cigarettes and concertgoers playing cornhole, in advance of Roger Waters’ second of three Philly shows last week.

But on the opposite side of Wells Fargo, a mild protest could be seen: StandWithUs/Philadelphia sponsored a truck to circle the city Aug. 9 with an ad that read, “Say NO to RACIST Attacks Against Israel by Roger Waters.”

By 6 p.m., the truck parked on 11th Street next to the sports complex near the second parking gate outside the entrance.

However, wandering through herds of Waters fans tailgating before the show, the evening felt tame, and the search for the truck was met with shrugs and “ughs.”

When asked if passersby had seen it, one Wells Fargo worker rolled his eyes and pointed toward 11th Street.

Although Puder said the truck remained outside the premises until 8 p.m. when the concert began, the truck was not visible prior. Wells Fargo security guards, Waters’ security officials, police officers and parking authorities all confirmed that after 7 p.m., the truck was asked to leave as it was illegally parked — not for the message itself.

One police officer said that only commercial vehicles are allowed near and in the parking lots, and a truck that big would have to be thoroughly searched before entering.

Regardless of visibility, Puder said he got the message across.

“A lot of people are going to wonder, ‘What’s racist about that?’ and hopefully they’re going to start reading,” he added.

Waters, the 73-year-old Pink Floyd co-founder, has not been shy about his anti-Israel opinions and support of the boycott, divestment and sanctions (BDS) movement against Israel.

At previous concerts, the show included a helium pig with a Star of David on it as well as a dollar sign and a sickle and hammer. (This year’s tour has Trump’s face on the pig.)

The Us + Them tour has been silent on BDS, instead turning attention to Trump.

Toward the end of Waters’ performance of “Pigs (Three Different Ones),” Trump quotes flashed on the screen: “Why was there the Civil War? Why could that one not be worked out?” as The Philadelphia Inquirer summarized.

If the helium pig didn’t give it away, the final image of that set read: “Trump Is a Pig.”

Puder added that Waters’ father was a Communist Party member but later changed his views to pacifism. He fought in World War II and died in the Battle of Anzio in 1944, when Waters was 5 months old.

“While his father died for Britain,” Puder said, “and against Hitler and the Nazis, he is advocating for a people that during the war sided with Hitler.

“Out of 196 countries in the world … many of them [are] dictatorships; especially in the Arab world, especially throughout the Middle East, particularly Iran. The only country he picks on is the only democracy in the Middle East.”

As Waters continues his tour — his last U.S. show is in Boston Sept. 28, then off to Canada — Jewish communities in those cities haven’t taken a backseat.

According to The Jewish Voice, New York’s Nassau County has continued to threaten legal action against the venue of Waters’ two upcoming shows in Uniondale, N.Y., if they are not canceled.

A law was passed a year ago that prevents companies and individuals from conducting business in the county if they support BDS.

“By enabling Mr. Waters to perform, [Nassau Events Center]” — which is responsible for the venue, Nassau Coliseum — “has given Mr. Waters a forum or platform to express his BDS ideology,” wrote county attorney Carnell Foskey in a letter obtained by Newsday.

Waters isn’t intimidated, as he reiterated in a Facebook Live video for the Palestinian Campaign for the Academic and Cultural Boycott of Israel.

“They’re gonna fail,” he said of the county’s threat. “I don’t think, I know they are, because you would have to tear up the Constitution of the United States of America, particularly the First Amendment, and throw it into the Hudson River, or the East River if that’s closer, in order for that to happen.”

Between concertgoers and the truck, other protests were absent — except for one in the second row.

Lary Koppelman took it upon himself to send his pro-Israel message to Waters face-to-face.

The 46-year-old has been going to concerts since he was 12 — including Pink Floyd.

Last year, he went to the Desert Trip music festival in California, where Waters was part of the lineup.

“I knew about his anti-Israel views,” he said. “I’ve seen him before, but never did he do what he did at that concert.”

Koppelman said Waters used his platform to commend BDS on college campuses. But what really got to Koppelman was a large Palestinian flag on the screen, which he thought was “wrong and hurtful.”

“It really bothered me,” he said. “So since then, I said if he ever comes around again, I’m going to make sure that I will greet him with a nice, big Israeli flag right in his face.”

He got as close as possible, as he guessed performers can really only see to the third row. Second-row tickets sold for $250 each — “money well spent,” Koppelman said.

“Throughout the show when the lights would come on, I would hold the flag up,” he said, and the two made direct eye contact at least three times.

Even though he was admittedly enjoying the music, he took the opportunity to get Waters’ attention when he greeted front-row guests on the floor level.

“He walked by and everyone was sticking their hands out to shake his hand or fist-bump,” he said. Waters “stopped and turned around, looked at me and smiled, and extended his arm out to fist-bump me, ’cause he did with everyone else, so I did.”

Koppelman noted that Waters did not mention Israel during the show.

“He must have had so much pressure coming down on him that he had to smile at me,” he laughed.

As the husband to an Israeli woman and father to children who have Israeli citizenship, Koppelman said he’s proud of his protest. 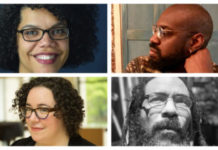 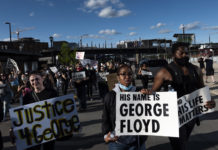 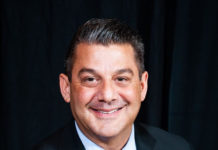