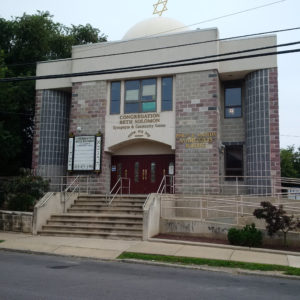 Philadelphia police continue searching for a man who made an obscene gesture to a security camera, then urinated against the wall of Congregation Beth Solomon in Northeast Philadelphia around 12:30 a.m. on Aug. 13.

Following his actions, the man ran down the synagogue steps, then drove off in a white four-door sedan.

According to video released by the Northeast Detective Division 7th District, the man made no attempt to shield his identity. In fact, he glared at the camera while he appeared to be speaking. After making the gesture with his right hand, he turned to desecrate the building.

“We believe the synagogue was targeted,” said police detective Lt. Dennis Rosenbaum, who’s dealt with a number of similar anti-Semitic incidents in recent months, including the vandalizing of Mount Carmel Cemetery and rocks thrown at the windows of Temple Menorah Keneseth Chai.

In response to the incident, the Anti-Defamation League (ADL) issued a strong statement.

“We are revolted by this most recent display of anti-Semitism in Northeast Philadelphia,” said Nancy K. Baron-Baer, ADL regional director. “We’ve seen vandalism targeting Jewish institutions in the region before, but this latest incident turns the stomach.

“The amount of hate a person must feel to desecrate a house of worship in this way is incomprehensible and contemptible.”

ADL Associate Regional Director Jeremy Bannett is concerned this latest incident, particularly its boldness, exemplifies a growing mentality in this country. He pointed out that in 2016 there was a 56 percent increase in reported anti-Semitic incidents over the previous year.

“It’s not unprecedented,” said Bannett referring to the latest incident at Beth Solomon, which had the doors to its mikvah then under construction at the time spray-painted with graffiti in January. The synagogue was also the target of a theft in September 2016 when a large metal menorah was stolen off of the front lawn and later returned. “It’s more often than not you see people more surreptitious in their vandalism.

“But people are feeling emboldened now to express anti-Semitism in more public brazen ways. With anti-Semitism and bigotry across the board the line of what was once unacceptable has been shifted.”