Jimmy Kimmel threatened to sue him for damages and Jon Stewart grilled him on national television, but for 13-year-old Will Rubin of Media, it was the coolest Bar Mitzvah ever.

The eighth-grader chose a Jimmy Kimmel Live! theme for his June 24 Bar Mitzvah at the Media Theatre, complete with an authentic replica set and video message from Kimmel.

“Will, I heard you themed your Bar Mitzvah after my show,” Kimmel said in the video. “I was so moved, I called my attorney to see what kind of damages I could collect.”

The show also sent Will an ice sculpture of Kimmel’s sidekick, Guillermo Rodriguez.

“I was completely shocked,” Will said of the message and gift. “I had no idea Jimmy Kimmel even received my message.”

In May, Will put together a video message inviting Kimmel to his Bar Mitzvah, complete with the warning that, “I want your job one day.”

The teen started watching the show about three years ago, almost accidentally.

“My husband and I went to the show a couple of years ago,” Will’s mom, Aimee Taxin Rubin, explained. “Will was originally watching the show because he DVR’d that episode to see if he could find us in the audience.”

Will added, “It was a great episode. Kanye West was on and, at that time, Jimmy and Kanye had a feud.” It captivating Will and convinced him to tape the subsequent episodes.

Aimee Taxin Rubin hoped Kimmel would record a quick “mazel tov, Will” for her to include in the party’s video montage.

“We knew even that was a huge long shot,” she said. “What evolved was totally unexpected.”

Will’s invitation to Kimmel was tweeted to the star and his writers, who enjoyed the video.

“He said he never had a Bar Mitzvah boy base his Bar Mitzvah around him,” Aimee Taxin Rubin said, noting the writers scripted a message for Kimmel, who then recorded it.

The Rubins, elated with Kimmel’s response, prepared to send a thank-you package to the show and send Will to overnight camp, moving on from the Bar Mitzvah.

Then, on July 12, Aimee Taxin Rubin received a call from Jimmy Kimmel Live! producers, who wanted Will to video chat with Kimmel on the next day’s show.

“To Will’s credit, he had just gotten off the plane from Europe when the show called us,” she said. “He was talking to the producers five minutes after walking in the door, still on Italy time.”

Despite the jet lag, Will agreed to do the show.

“I’d never been on national television before,” he said. “In my mind, I was like, ‘Don’t freak out, don’t freak out.’”

Kimmel introduced Will, who fielded a few questions until a scraggly-looking Jon Stewart interrupted the host.

“I didn’t recognize him at first because I’m so used to seeing him in a suit,” Will said of Stewart, who questioned the teen about his reverence for a non-Jewish talk show star.

“Sheket b’vakasha!” Stewart shouted at Kimmel before adding to Will, “Don’t be fooled by his learned-looking beard and his puffy, sad eyes. He’s not rabbinical, he’s just unhealthy.”

“I had always heard that in Hebrew school,” Will said of the Hebrew phrase, which translates to “please, be quiet.” “It was cool because it was a joke only some people could get.”

At the end of his appearance on the show, Will announced he planned to donate a portion of his Bar Mitzvah money to Children’s Hospital Los Angeles, where Kimmel’s infant son recently underwent open heart surgery.

“I was so moved by the episode where he explained [the heart condition],” Will said. “Jimmy asked me in his video for half of the money my grandparents gave me, but I decided to donate it instead,” which his mom noted was done prior to the video call with Kimmel.

His Bar Mitzvah project also cemented the value of tzedekah for the teen.

“I had a candy bar fundraiser,” at his theater company, Will said. “I used the money I raised to buy Christmas gifts for women and kids living in the Domestic Abuse Project of Delaware County shelter.”

Will attends Temple Sholom in Broomall, where his Bar Mitzvah service was held.

“It was just the perfect day from beginning to end,” Aimee Taxin Rubin said. “It could not have gone any better.” 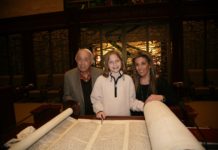 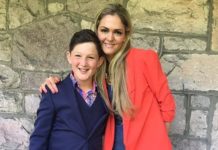