It may have been the quickest wedding in modern Jewish history, but the nuptials of Avi Steinberg and Rachel Dixon certainly didn’t take away from the love-is-in-the-air theme surrounding last week’s Maccabiah Games opening ceremonies.

If anything, the hastily-performed union, believed to be the first in the quadrennial games’ history of opening productions, was the festivities’ crowning achievement.

Still viewable online thanks to a YouTube recording made by the bride’s aunt, the drama began toward the end of the July 6 ceremonies at Jerusalem’s Teddy Stadium when an announcer called Steinberg, an ice hockey player from Canada, to the stage. He told the audience how proud he was to be in Israel with his girlfriend, Dixon, who had — only a week before — completed her conversion to Judaism.

Dixon quickly joined her beau, who promptly got down on one knee and proposed. Some prodding by the female announcer convinced Dixon to get married right then and there.

The couple retreated backstage and after a brief interlude — during which a coterie of female performers, all bedecked in wedding dresses, took their positions as a singer entertained the crowd, and a rabbi and a chuppah appeared — emerged in white dress and tuxedo.

The next couple of minutes whirled by as the rabbi, Avi Poupko, instructed Steinberg on placing a ring on Dixon’s finger and issuing the traditional marriage declaration, had Dixon give her groom a ring and quickly recited the seven blessings over a cup of wine.

Viewers would be forgiven for considering the whole thing a tad staged and, according to the couple and their rabbi — a friend from their shared days in Montreal — everything but the chuppah was indeed planned from the beginning. Steinberg and Dixon were already engaged and had a previously scheduled wedding to take place this week. Getting married at the opening ceremonies was only a surprise for Dixon.

But beyond being a touching moment, the wedding — which took place the same day that Israeli Prime Minister Benjamin Netanyahu shelved a controversial bill that would have granted a monopoly to the haredi Orthodox-controlled Chief Rabbinate on determining the rights of converts to make aliyah — has become something of a statement in the fiery debate over religious pluralism in Israel.

“The outpouring of love and support has been downright outrageous and endless,” Steinberg said by email on July 11, in between rounds and sightseeing with his new bride. “Given that it often feels like most headlines are negative, it feels so great to have contributed to creating news that awakened love and joy in so many people.

“The aim was to light a spark,” he continued, “but I just never expected it to catch fire.”

Rabbi Steven Wernick, CEO of the United Synagogue of Conservative Judaism, which has joined other non-Orthodox movements and Diaspora Jewish organizations in battling Netanyahu’s government over personal status issues and the blocking of a plan to grant official recognition to an egalitarian prayer space at the Western Wall, remarked on Facebook that “this is what pluralistic Judaism looks like.”

After the weekend, Wernick, through his assistant, qualified his sentiment, given that Poupko is an Orthodox rabbi.

“Rabbi Wernick is thrilled for the couple,” the assistant said. His statement, “in the current climate in Israel concerning conversion and the Kotel, was meant as irony.”

But for attendees who witnessed the wedding in real time, that it was an Orthodox ceremony was not clear. There was no ketubah given to the bride and Poupko was not identified as Orthodox.

Poupko, who prior to making aliyah, was for a couple of years the Hillel rabbi at Harvard University, said later that the ketubah was signed by the groom earlier in a hotel room and that the compressed nature of the ceremony was mandated by the producers trying to keep a production on schedule.

It was the producers, said Steinberg, who came up with the idea of having his wedding telecast live throughout Israel.

For his part, Poupko said that he didn’t intend for people to see politics in the celebration, but he didn’t exactly complain about that, either.

“It went well with the overall message of the Maccabiah Games, which, at the end of the day, is about Jewish unity,” the rabbi said. “And what better way to recognize and celebrate Jewish unity than the feature a new Jewish couple, from a different place, coming together and celebrating a Jewish home?”

It helped that the couple were not making aliyah and were not getting married as Israelis.

“They’re only here for a couple of weeks,” Poupko noted. Had they made aliyah, then any wedding in Israel would have had to have been done under the auspices of the Chief Rabbinate, a process that for a convert — even one, like Dixon, who underwent an Orthodox conversion — can drag on for weeks and months.

“It was a nice wedding,” said Rabbi Reuven Poupko, the officiant’s Montreal-based father and the rabbi who presided over Dixon’s conversion. “The intent was not to make any kind of statement, as the ambush of the bride was planned before the [conversion] legislation was proffered in the Knesset.”

Still, the elder Poupko has a solution that would make weddings like Steinberg’s and Dixon’s more commonplace: Take the Israeli government out of the religion business.

It’s a bit of a Western idea, but the rabbi sees it succeed in the United States. As such, it’s an approach all Israelis should seriously consider.

“The Orthodox establishment in Israel seems to go out of its way to put the worst face of Judaism forward, and often act without regard to the long-term consequences of their actions and rhetoric,” he said. “Nobody who cares about Judaism and holds it sacred wants it debated in the Knesset.

“Those countries that have entangled government authority with religion have ended up with empty churches,” Reuven Poupko added.

“You need only go to Italy or Quebec, where I live. The entanglement of religion and state tends to sully both.”

For all of his happiness that Dixon and Steinberg got to celebrate with tens of thousands of people, Reuven Poupko did have one complaint.

“I was disappointed there was no food,” he laughed. “I mean, nobody got to eat anything. What kind of a wedding is that?” 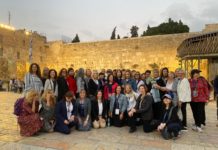 What I Learned from Israel’s Women Leaders 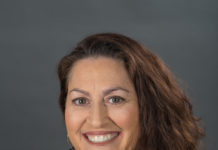