The 8.1-mile shore destination encompasses the towns of Longport, Margate, Ventnor and Atlantic City. The summer fills its beaches with visitors — who are dodging U.S. Army Corps of Engineers dredging crews — and transforms the island into a vibrant Jewish community.

The Milton & Betty Katz JCC is exhibiting “Jewish Treasures of the Caribbean,” an image-based exploration of early Jewish communities in the New World. All photos were taken by Philadelphia native Wyatt Gallery.

Gallery was working as a photojournalist in Trinidad when an assignment took him to the island of Curaçao. There, he encountered the oldest synagogue in continuous use in the Western Hemisphere, Mikvé Israel-Emanuel. Founded in 1651 by Jews fleeing Spanish and Portuguese Inquisitions, the synagogue features sand-covered floors, brass chandeliers and swaths of dark mahogany.

He embarked on a six-year journey photographing historic Jewish synagogues and cemeteries across the Caribbean, with stops in Barbados, Aruba, Jamaica and St. Croix, among others.

“It’s something dear to your heart if you’re Jewish,” he said. “The survival and legacy of the Jewish people.”

Some Philadelphians may recall that the Gershman Y hosted the exhibit in 2015. Although little in the display has changed since then, the setting of Margate, a largely Jewish seaside town, may provide additional gravity in a showing about disappearing Jewish beach communities.

The exhibit, which is free and open to the public, runs through July 28 and is open during the JCC’s normal hours.

Although events like Gallery’s art exhibit point to a bustling Jewish scene in Margate, the lot of what used to be Temple Emeth Shalom now stands as a construction site for three proposed single-family houses. The homes will feature amenities like wrap-around porches, master suites and decks with ocean views, according to The Press of Atlantic City.

Geller said the merger has provided “a new energy and lifeblood” to the congregation. Temple Emeth Shalom previously had about 125 families, limiting its offerings. Since combining with Congregation Beth Judah, whose previous membership was around 400 families, “we have five times the programming,” Geller said.

At Congregation Beth Judah, the temple facilities were in need of extensive repairs. The costs were too much for the congregation alone, but by combining finances with Temple Emeth Shalom, the renovations were made.

Some congregants express lingering reluctance to embrace the change. Geller noted the religious basis for acceptance, stating, “The Jewish tradition looks forward. We appreciate our roots, but Judaism is an optimistic, forward-looking religion.”

More than 300 women attended the luncheon at the Golden Nugget resort. The keynote address was delivered by Jennifer Hyman, CEO and co-founder of Rent the Runway, a luxury clothing rental service.

Hyman, a noted Jewish female business owner, extolled the value of entrepreneurship to the crowd.

“She talked about being a woman in the industry and following your dreams,” Brett Matik, event co-chair said.

Matik said the 24-year-old event, started by her mother, Ruth Harrison, was designed to impact the community by educating women and giving back to charities.

“Growing up, giving back was ingrained in me. As long as we’re able to, it’s an obligation,” Matik, who works as president of Harrison Beverage Company, said.

She concluded, “It’s the value of tzedakah. Everyone can do something.” 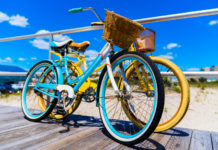