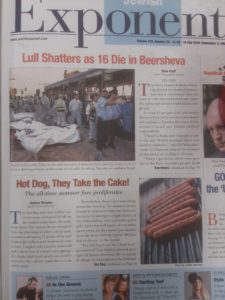 The cover of the Sept. 2, 2004 Jewish Exponent featured three stories that were as different as can be.

The paper led with the horrific news of two bus bombings in Beersheva, Israel on Aug. 31 that killed 16 and injured more than 100. Hamas claimed responsibility.

The bombings were especially unsettling because Israel had enjoyed a sense of calm in the prior months, according to the JTA article.

In a line that could appear in a story today, then-Prime Minister Ariel Sharon said, “The fight against terror will continue with full strength.”

On a lighter note, the cover featured a story about the endearing popularity of the hot dog.

In his first stint at the Exponent, current Editor-in-Chief Joshua Runyan talked about all things hot dog, focusing on the opening of a kosher hot dog cart at the first preseason Eagles game ever held at then-new Lincoln Financial Field.

“It feels good to a Jew at an Eagles game,” said Israeli immigrant Yuval Yonah, who was holding both a beer and a hot dog.

Reporting from New York, Runyan also contributed two stories (one appearing on the cover) about the Republican National Convention.