The Catskills’ status as a Jewish vacation mecca likely peaked in the 1950s — and the Exponent featured more than two full pages of advertisements for various resorts. 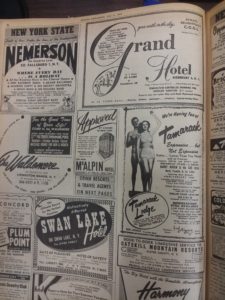 The legendary Grossinger’s was represented in a tiny ad (not pictured) announcing it was accepting “reservations for honeymoons and summer vacations,” but other resorts paid for larger ads.

Today, most of those resorts are defunct or exist in other forms.

For example, Nemerson now houses a girl’s yeshiva, according to an article in The New York Times.

The Grand Hotel closed in 1966, according to catskillarchive.com.

The Tamarack Lodge did last longer than most, as it adapted to the times: As the resort tried to appeal to a younger generation, entertainers such as Danny Kaye and Jerry Lewis were replaced by rock-and-rollers such as Cream, The Who and Janis Joplin, according to abandonedhudsonvalley.com.

A 1995 fire during Passover destroyed 300 rooms; the resort was closed by the local board of health in 2000. Another fire in 2012 destroyed 30 buildings on the property, which remains abandoned.