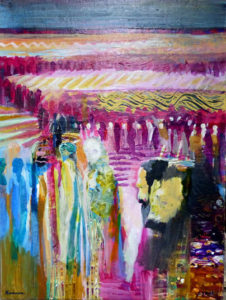 Parshat Korach opens with these words: “Then Korach, the son of Izhar, the son of Kohath, the son of Levi, with Dathan and Abiram … separated themselves. … And they rose up before Moses, with 250 Israelite men — chieftains of the congregation, the elect men of the assembly, men of renown; and they assembled themselves together against Moses and against Aaron, and said to them: ‘You take too much for yourselves! For all of the congregation are holy, every one of them, and the Eternal is within them all! Why then do you raise yourselves up above the assembly of the Eternal?’ And when Moses heard it, he fell upon his face.”

With his grandiose public posturing, his 250 men and his accusations of hypocrisy, Korach bursts on the scene prepared for a coup d’etat. Airing his grievances at a calculated moment designed to rally the people to topple the regime, Korach presents himself as a whistleblower.

And, of course, he was a fake — an opportunist who made his power play while the Hebrews were still only months removed from Egypt, while it still was possible to destabilize the emerging social order.

As we know, it ends badly.

The Earth swallows up the rebels in front of the community. In a reverse-mirroring of the splitting of the Sea of Reeds — which gave life to people who should have drowned — the horrified Hebrews now see solid ground split open to drown people in bedrock. Panicked, they blame Moses and Aaron for the calamity.

A plague then spreads among the community, wiping out thousands before Moses and Aaron are finally able to intercede and stop the damage.

It’s the anger in Korach that resonates most for me now, in this dangerously angry time. Korach reminds us of two basic truths about anger: Anger is a secondary emotion, and humans tend to make really bad decisions when they’re angry.

Modern psychology has mapped the architecture of anger, demonstrating that anger can only arise after a person has felt something else, like fear.

So what did Korach feel first? Disappointment, lack of self-worth, personal diminishment, fear?

Korach’s experience of painful primary emotions leading to the welling up of anger is, of course, the kind of experience that is part of every human life. Where he went wrong wasn’t in feeling angry; it was in his giving over his state of mind to anger, and in making important decisions while angry.

Later on, the Book of Bamidbar will offer us another story that can serve as a counterpoint to Korach. In Numbers 26, we meet five sisters: Mahlah, Noah, Hoglah, Milkah and Tirzah, whose father, Tzelophehad, had died in the wilderness without any living sons to inherit his future land allotment in Canaan. The law, as it was, denied daughters the right to inherit even if there weren’t any sons in the picture, and these daughters did not think that was fair.

We can guess what some of their primary emotions might have been: fear, sadness and the woundedness that comes from injustice. Plenty of fuel there for anger to grow and then take hold of their ongoing states of mind.

Like Korach, these five women ended up deciding to face Moses, in public, and bring a grievance. But instead of letting those painful primary emotions grow into decisions made in anger, Tzelophehad’s daughters found the inner strength to channel their feelings into a different state of consciousness: courage. They may well have felt angry, but they didn’t allow anger to conquer them.

From the place of courage, they took constructive action, challenging authority. The episode ends with God upholding the righteousness of their claim, and the law changes.

Korach was an angry guy who tried to muscle and bully his way into power by denigrating, threatening and manipulating people. The five sisters, in contrast, dealt with whatever anger they felt, and then made a plan of action from a place of courage.

Korach’s rage opened up the Earth and swallowed people whole. The five sisters’ courage opened a channel that generated new divine insight and instruction. May we be blessed with the patience and skill to be able to identify the primary emotions underlying our own anger, and to learn how to respond to the pain in our lives with creative courage.

Rabbi Maurice Harris works as the associate director of affiliate support at RRC/Jewish Reconstructionist Communities. He is the author of two books, Moses: A Stranger Among Us and Leviticus: You Have No Idea. The Board of Rabbis of Greater Philadelphia is proud to provide the Torah commentary for the Jewish Exponent.