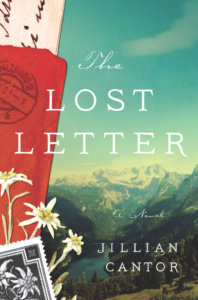 It’s rare to read a story set during the Holocaust and associate it with a love story — but then you haven’t read The Lost Letter by Philadelphia native Jillian Cantor.

The story takes place in both 1989 Los Angeles and wartime Austria with effective and well-executed dual narration and storylines. The stories connect and overlap in ways that will keep the reader needing to know what happens next.

Kristoff is the apprentice of a Jewish stamp engraver who disappears during Kristallnacht. Together with the stamp master’s daughter, Elena — for whom he falls — Kristoff, while forced to engrave stamps for the Germans in his boss’ stead, becomes a part of the war in a way he never imagined.

Meanwhile in sunny L.A. in the ’80s, Katie Nelson is reckoning with her divorce and her father’s memory loss as she goes through her father’s stamp collection — finding an old, unmailed love letter whose stamp sticks out to appraiser Benjamin Grossman. Katie and Benjamin are taken on an unexpected journey to find the story of the stamp and in the process find a story of love and sacrifice that makes Katie — and you — think about how far she would go for love.

And there may be tears, depending on the type of reader you are, both happy and sad.

You will devour this novel.

Cantor notes in an afterward the significance of a written letter in our digital age. This book, with its relatable characters and strong storylines of loss and love, reveres the power of the written word, as stamps become used as a means of resistance and forging papers as a ticket to freedom despite the danger in heading to the post to mail them. It also makes you reflect on the powerful enormity of choice, and how one good or bad one can alter even generations.

Backed by expert research of the use of stamps as resistance during World War II (a true story, as Cantor notes), Cantor weaves a story with a real-life backdrop and fictional characters who you will instantly love, and maybe encourage you to write a love letter of your own. 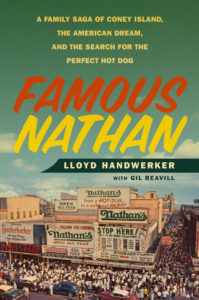 Immortalized in song, print, film, art and any other medium you can imagine, the American Dream is a timeless subject that never seems to grow old.

And Nathan Handwerker’s story is the epitome of it.

Better known as the guy behind the Nathan’s Famous hot dog empire, Handwerker was an illiterate and impoverished Jewish immigrant from Poland who worked hard, developed an idea and used his business smarts to develop an empire synonymous with New York City and Coney Island.

After arriving in the United States in 1912, Handwerker spent the next few years working a variety of menial jobs, often in restaurants. Although he was often recognized for his hard work, the pay remained low and the hours long.

By 1916, however, Handwerker set off on his own, leasing a counter 5 feet long and 8 feet wide on a Coney Island corner. At first, he sold frankfurters for a dime apiece and lemonade and orangeade for a nickel.

The business struggled until Handwerker dropped the price of a hot dog to a nickel — and quadrupled his gross. With others selling hot dogs for a dime, the restaurant appealed to common laborers who literally were counting their pennies.

From there, the restaurant grew by leaps and bounds, and Famous Nathan chronicles it all.

Aside from Handwerker’s hard work, his dedication to details played a major role in his success. The book relates numerous tales of Handwerker sampling raw hot dogs to make sure the spice mix and texture were just right; he also visited Maine potato fields to get exactly which spuds he wanted.

Written by the grandson of Nathan Handwerker, it’s reasonable to expect a glowing tribute — and there are plenty of fond remembrances of longtime employees (such as the guy who could serve 60 hot dogs per minute) and Nathan’s wife, Ida — but Lloyd Handwerker doesn’t sugarcoat his grandfather’s story.

There are tales of preferential treatment from police (free food is always popular) and extensive coverage of Nathan Handwerker’s two often-feuding sons, Sol and Murray, both of whom worked for years in the business yet had radically different ideas for evolving Nathan’s Famous.

And for all his business acumen, Nathan Handwerker comes across as a suspect father. There’s gender bias against his daughter, Leah, who had a minimal role in the family business, and the patriarch was sparing in his praise to all his children, not to mention his employees.

Lloyd Handwerker employs an easy writing style which helps make Famous Nathan a quick read, although the book seems to end sort of abruptly by merely skimming over the years since the company was taken private in 1987. Nathan Handwerker died in 1974.

It’s also clear the author is disdainful of the direction the company has since taken, citing longtime former workers complaining about declining quality and a move away from the values his grandfather established.

Some of that could be sour grapes, as the company continued to succeed. Nathan’s Famous-brand hot dogs are readily available in supermarkets, and the company’s website reports 238 restaurant locations in the United States, with other locations in Kuwait, Russia, the Dominican Republic, Jamaica, Mexico, Egypt, Costa Rica and Turkey.